Where you can rent a luxury 2,800 ft. beachfront villa for less than $90/night 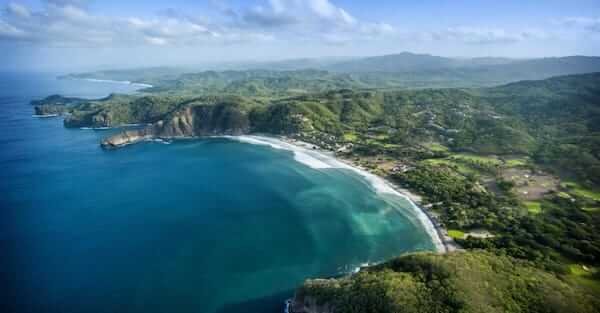 Last week I wrote about farmland in South Africa…

And how it’s taken a pounding thanks to a radical politician who is threatening to seize farmland from white farmers without compensation.

While I don’t think it’s time to buy South African farmland yet – that situation can get MUCH worse before bottoming – it’s always smart to keep an eye on a country in crisis.

The country made headlines in the Wall Street Journal, New York Times, etc. as the next hip spot – popular for eco-tourism, including world-class surfing.

Auberge, an ultra-luxury hotel group, even took over management of a coastal resort there called Mukul (as of June 25, the resort has closed indefinitely).

San Juan Del Sur – a sleepy fishing village in the 90s – is now a mecca for surfers.

But everything changed in April.

Daniel Ortega, Nicaragua’s president, has ruled since 2007. He also previously led Nicaragua from 1979-1990 – after his Sandanista party overthrew the Somoza dictatorship in a violent coup.

Since re-entering the presidency, Ortega (and his wife, who just happens to be Vice President) have gained dictatorial power… and lost tremendous popularity with Nicaraguans.

Then, in April, Ortega announced pension reform, both raising taxes and slashing benefits.

As an aside, this is a topic we regularly discuss in Notes. Most countries’ pensions and social security programs are woefully underfunded. So is Nicaragua’s. They simply cannot fulfill the promises they’ve made to their citizens.

Of course, most governments simply lie about it… or merely pretend that everything is going to be OK.

It’s incredible that one of the few politicians in the world to actually acknowledge his country’s pension crisis– Daniel Ortega– is a former communist revolutionary!

But Nicaraguans weren’t happy with Ortega’s intended reforms (which is another powerful lesson). So they started protesting in the streets and demanding Ortega’s resignation.

Ortega answered with violence. More than 300 protesters have died since April.

It’s a scary situation. And five months later, it’s not settled. Ortega still has troops patrolling the country in search of protesters.

As a result of the violence, tourism in Nicaragua has been crushed.

Thousands of Nicaraguans have lost their jobs in tourism. Many hotels and tour operators have closed.

One successful realtor we know in Nicaragua tells us that the past few months have been brutal for his business– there are VERY few buyers. And prices are falling.

As an example he told us that one beachfront property in a premier development on the Emerald Coast recently went under contract for almost 50% off its asking price.

And more deals like this are happening each week.

There are similar deals with rentals too, given that many property owners in Nicaragua rely on supplemental rental income to maintain their vacation homes.

And with no income coming, many are getting desperate, slashing their nightly rates by 20% to 50% or more.

I had someone on my team try this out—combing through AirBnB listings and asking owners in San Juan Del Sur for a 50% discount for a weeklong stay this month.

I found lots of great deals, including a boutique loft next to the beach with a private swimming pool. The asking price for seven nights was $605. The owner accepted $420 (a 30% discount).

So if you’re an experienced traveler, it may be worth a trip to Nicaragua for a discount vacation. You can definitely get great deals on gorgeous rental properties.

As for buying in Nicaragua…

If you’ve been thinking about it, now may be a great time to start looking. And, to be honest, Nicaragua is a great option for a lot of people.

If you’re from North America, it’s close and you can get nonstop flights.

China is also throwing tons of money at the country.

And the infrastructure is improving dramatically. The Emerald Coast just got its own airport… so you can fly there from Managua, the capital city – before, it was a two-hour drive.

Mukul, the resort I mentioned earlier, was built by Nicaragua’s richest man, Carlos Pellas. So the country went out of its way to help match his investment in the area, including paving the roads from the highway to the beach.

Nicaragua offers a lot of the benefits of Costa Rica at a much lower price. There are beautiful communities, great beaches, friendly locals plenty of cheap help.

But that obviously comes at a certain cost – mainly the political risk.

If you’re just looking for cheap, beachfront property, there are still lots of other places in the world.

For example, Chile still offers some of the best deals on beachfront property on the planet, especially if you’re into surfing. Ecuador is also quite cheap.

But if Nicaragua has been on your radar, it may be worth a trip today.