Who would possibly do something so crazy? Pretty much everyone in Japan. 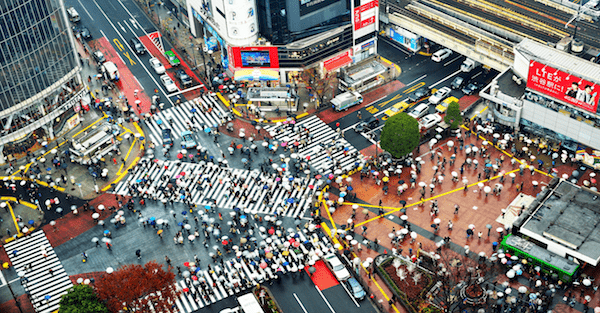 It was precisely 20 seconds past 9:44am on November 14, 2017 that Japan Railways train number 5255 departed from Minami Nagareyama Station on the outskirts of Tokyo.

Hardly anything seems noteworthy about a train leaving a station. It happens countless times each day all over the world.

Except THIS particular train was supposed to depart FORTY seconds past 9:44am. So it left the station 20 seconds early.

In virtually every other country in the world, a train departing 20 seconds early would not even be noticed. Nor would anyone care.

The early departure was such a big deal that the train company conducted an investigation into how such a transgression could have possibly occurred.

And then the CEO issued a formal apology explaining what steps the company was taking to ensure it wouldn’t happen again.

Clearly this is one of the most unusual places in the world.

I actually refer to it as “Planet Japan”, because out of the 120+ countries that I’ve visited, Japan is by far the most… different, with a culture so unique it’s practically Martian.

Japan is a land of endless paradoxes.

Think back to 2011 when the country was devastated by a 9.0 magnitude earthquake.

Rather than panicking and looting, Japanese people sat quietly outside of their demolished homes waiting patiently for the authorities to tell them what to do, even while the nearby nuclear reactors were melting down.

Yet this is also the country where women are routinely groped on crowded subways, and used panties are sold in vending machines for sexual pleasure.

Streets in Tokyo are spotless. Yet you can walk for miles without seeing a single garbage bin.

This is a culture so serious that they perfected ritualistic suicide. Yet they go bonkers for cartoons and animated mascots.

The paradoxes extend to the economy as well.

In 1945 after being obliterated by the first atomic weapons in history, the Japanese people set themselves to the task of development. And they quickly built their economy into one of the most prosperous in the world.

Today Japan is wealthy and extraordinarily well developed. But the economy has been stagnant for decades.

Japan’s primary stock index, the Nikkei 225, is currently around 21,000… a level it first surpassed in March of 1987 when Lethal Weapon was the #1 movie in the world.

In other words, the stock market has returned zero gains to investors after three decades.

Japan is a land of extraordinary innovation. Just about everything here, from robotics to machinery, down to some of the most basic, everyday items (like toilets!) are cutting edge and different.

Yet there’s minimal entrepreneurship in Japan. And there’s a rampant problem with suicide among young workers (which reached a 30-year high in 2018).

The Japanese government’s debt burden is the highest in the world. At roughly 1.1 QUADRILLION yen (that’s fifteen zeroes, or about USD $10 trillion), Japan’s debt is more than twice the size of its entire economy.

And it’s only getting worse.

Then there’s the Social Security system… which is already draining the treasury. Japan’s population is THE oldest in the world, with the highest percentage of people over the age of 65, yet the longest life expectancy.

Recently a 90-year old pensioner voiced concern about the future solvency of Social Security, to which the Japanese finance minister commented, “How much longer do you plan to live?”

Last year, it took 95% of the government’s tax revenue to service the debt, and pay for their national Social Security system. 95%!

Only 5% was left over for literally everything else in government. And that’s why the Japanese government has to keep borrowing.

The central bank has obliged, pushing interest rates down to NEGATIVE levels. The current yield on the Japanese 10-year government bond is a big fat MINUS 0.12%.

So you have to actually pay this bankrupt government money in order to lend to them.

Crazy, right? Who would do something so insane?

Pretty much every institution in Japan.

Major corporations. The central bank. Even individual investors– mom and pop pensioners, invest their cash in these negative yielding bonds that have no hope of ever being credibly repaid.

And of course, Japanese commercial banks buy these government bonds as well, meaning that pretty much everyone on Planet Japan with money in the bank is exposed to this garbage.

Don’t get me wrong– Planet Japan is truly wonderful: modern, captivating, and richly rewarding. It’s one of my favorite places to visit.

But it’s a great example of why a Plan B is so important.

But in light of such compelling evidence, that’s certainly wishful and dangerous thinking.

Plan B logic is pretty simple: if your government is completely bankrupt, you probably don’t want to hold 100% of your assets there.

If your central bank keeps printing money into oblivion, you probably don’t want to keep 100% of your savings in that currency.

If your banks are loading up on negative-yielding government debt (or any other garbage investments), you probably don’t want to keep 100% of your money there.

Obviously I’m not just talking about Japan here. Much of Europe and North America is in the same boat. Or at least the same choppy waters. So the same principles apply.

These steps aren’t pessimistic or gloomy. Having a Plan B is just common sense and absolutely worth your consideration.