Why it absolutely, positively does not matter 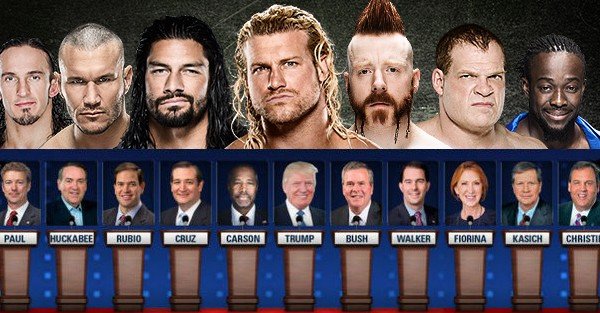 I’ll admit that when I was a kid, I used to spend hours watching wrestling on television.

Hulk Hogan, the Macho Man Randy Savage… I loved all the old-school guys from the WWF, as they used to call it back in the 1980s.

It was mesmerizing, a bit like I’d imagined gladiator combat would be.

But I’ll never forget when the dream completely collapsed.

My father took me to a live match when they came to our town and we had great seats near the front row.

For the first time it was obvious to me, even from a young age, that it was all fake.

I was devastated. I had actually believed that there were good guys versus bad guys beating each other up in the ring.

It turned out to be a complete hoax, something that’s known today as “sports entertainment”.

In fact, it’s essentially the same with elections today, which I see as “political entertainment”.

Watching Hilary Clinton debate Bernie Sanders—or like yesterday evening, Jeb Bush against Donald Trump—doesn’t strike me as too different from when Hulk Hogan faced off against Andre the Giant in Wrestlemania.

Having lunch yesterday with a good friend from the UK, he asked if I thought that any political candidate was worth it.

I told him that I’m sure they’re all very nice people. Many of them might even mean very well and have very good intentions.

I’ll also admit that occasionally they have decent ideas and that there are small steps in a positive direction.

But the truth is, none of it really matters.

As I explained to my friend, the United States objectively speaking is far past the point of no return.

The government’s own financial statements prove beyond all doubt that they are flat broke to the tune of more than $60 trillion, and that they lose hundreds of billions of dollars more every year.

In 2013, for example, the government lost $805 billion according to the Government Accountability Office.

Every major pension program is either already insolvent or desperately unfunded.

This isn’t Simon Black’s analysis; the Treasury Secretary of the United States of America himself tells us that the Social Security’s Trust Funds are nearly out of money.

The Federal Reserve is nearly insolvent, and on a mark to market basis is likely already insolvent.

The FDIC, which is supposed to support the entire US banking system, admits that it fails to meet the minimum capital requirements as required by law.

US banks are precariously illiquid and exposed to trillions of dollars worth of very high-risk assets. Something that even the Fed and the FDIC do not consider to be “sound”.

So to presume that a single individual is going to ride in on a white horse, wave a magic wand and fix all this is just a childish fantasy.

The hope is that “the right person” can at least start to steer the ship in the right direction.

This is the delusion every election cycle; people end up believing the entertainment is real, and that the right person can start to fix everything.

Then a few years later, they realize that the ‘right person’ is almost exactly like the last person.

Not to mention, ‘righting the ship’, mathematically speaking, is an impossibility.

The government now spends almost all of its tax revenue just to pay interest on the debt, and the mandatory programs, like Social Security and Medicare.

Both of which, by the way, are expenses that grow every year.

There is no way out. It’s like trying to change directions for a ship that’s already half-sunk.

At that point, it really doesn’t matter who’s the captain of the ship. All that matters is if you have a seat on a lifeboat.

This is not intended to be a downer.

It’s a little dose of reality, but in it there’s actually good news. Because all the tools and resources exist for you to build your own lifeboat.

You don’t need to rely on a government to fix the problems that they themselves created.

Rational people have a plan B.

And with a little bit of planning, backed up by small, common sense action, you can ensure that you’re an amused spectator to this bizarre entertainment, rather than a victim of it.