052: Yes, the US government really is bankrupt. Here’s proof. 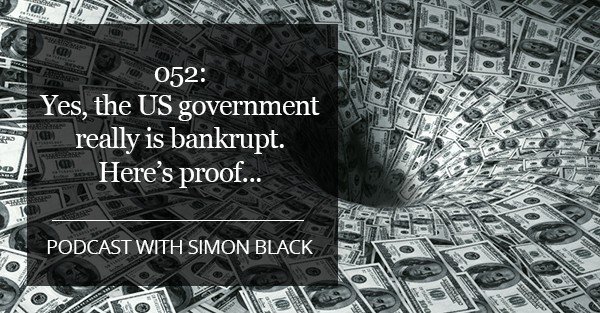 I’ve long-stated that the government of the United States is completely insolvent.

The government’s own numbers show that official liabilities, including debt held by the public and federal retirement benefits, total $20.7 trillion.

Yet the government’s assets, including the value of the entire federal highway system, the national parks, cash balances, etc. totals just over $3 trillion.

In total, their ‘net worth’ is NEGATIVE $17.7 TRILLION… a level that completely dwarfs the housing crisis.

If you include the government’s own estimates of the Social Security shortfall, this number declines to NEGATIVE $60 TRILLION.

And it gets worse every year.

Now, is this balance sheet an accurate reflection of reality? Do we really trust the bean counters to tell us what the United States of America is really worth?

Surely there must be significant intrinsic value to the United States military, for example.

Or the US government’s ability to collect taxes.

Or what about the value of all the natural resources underground?

These must all be HUGELY positive and would swing the government’s net worth back in the right direction.

The US military is certainly one of the best-trained and most effective forces in history.

But it’s difficult to place a substantial value on it when the government can no longer afford to use it.

And even when they do use it, the overall cost of doing so is negative.

The wars in Iraq and Afghanistan have cost the taxpayers $4 trillion. But where’s the financial benefit?

Aside from a few defense contractors profiting handsomely, the Chinese got most of the oil.

ISIS ended up with much of Iraq. And Iran made out like a bandit, with the US government taking out its most threatening neighbors free of charge.

Bottom line, even the best asset in the world can end up being a big liability if it’s used improperly.

So what about the tax authority of the US government? If Uncle Sam can collect $3 trillion in tax revenue each year, surely that must count as a huge asset.

And it absolutely is. If you conduct a Present Value calculation of the future tax revenue of the US government discounted by the official 2% rate of inflation, the US government’s ability to tax its citizens is ‘worth’ $150 TRILLION.

But… if you’re going to count the government’s tax authority as an asset, you have to be intellectually honest and consider the expenses as liabilities.

Think about it: yes, the government brings in tax revenue every single year. But for nearly every year over the last seventy years, they’ve spent far more money to deliver on the promises they’ve made to their citizens.

Those promises are liabilities. And given the government’s spending history since the end of World War II, the liabilities far exceed the tax authority asset.

More importantly, though, isn’t it a little bit scary to consider that the government’s #1 asset is its ability to steal money from you?

Or that the only way the government can make its liabilities go away is by defaulting on the promises it has made to its citizens?

That’s their only way out: steal from you, and default on you.

Join me in today’s very sobering (and inspiring) podcast as we dive deep into the government’s own numbers and discover the truth… and what you can do about it.