The end of the euro: When will it happen? 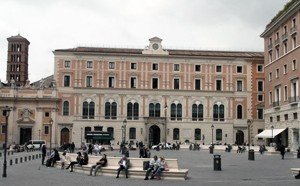 My 2-year old nephew in Australia loves getting postcards.  He already associates me with frequent traveling.  I’m referred to as “Tim Hong Kong jet plane.”

So before leaving Italy today, after a fantastic week in the Umbrian countryside with our Sovereign Man Total Access members, I set out to mail him some postcards. What I got, among other things, was a useful lesson in Italian bureaucracy.

In Hong Kong, on the rare occasion I need to mail a letter, I put a few coins in the vending machine on the outside wall of the post office. Space is a prized commodity that costs a lot of money in Hong Kong, so post offices are small and efficient.

Here in Rome, the main post office at Piazza San Silvestro is in a majestic old building with imposing architecture.  There were acres of cavernous space inside that could have been much better used by high-end retail shops earning a profit. Instead it goes to Italy’s famously slow, inefficient, loss-making postal service.

It was a procession just to buy a few stamps. Stand here, stand there. Take this ticket, fill out this form, print that form. What should have taken 10 seconds took 10 minutes. I finally got what I needed, but the process it took to get there was a real eye opener.

They have all these fancy IT systems—the mail clerk was in a clicking frenzy moving from screen to screen with all sorts of dropdown menus and product codes. But I get the sense that this ‘technology’ just gives the post office a veneer of modernity and sophistication without actually being necessary or adding any value.

This is typical of bureaucracy: take a simple task, make it unnecessarily complicated, then spend a bunch of money on technology that makes it even more complicated.

Given my experience this morning, Italy has clearly mastered the art of unnecessarily complicating the simple. It’s no wonder they have serious problems paying the bills.

Robust economies are productive… and productivity is typically not associated with the elderly. Italy has one of the world’s oldest populations concurrent with one of the lowest birth rates.

This trend drives an unsustainable fiscal quandary: bloated public sector bills with lots of old people to pay pensions to, coupled with a rapidly shrinking population devoid of young workers to pay taxes.

At this point, Simon and I both agree there can be little doubt that Italy will exit the eurozone… most likely voluntarily. A return to the lira means the Italian government (probably to be headed by Berlusconi once again) would be free to print currency at will. This is the only reasonable solution remaining.

When will it happen? Probably sooner than we think. Look at the European bond market— making a loan to the Italian government for three years yields just 3.642%… an absurdly low figure given the country’s untenable finances.

Meanwhile the same loan made to the German government yields less than one one-hundredth of that amount (0.034%…) Yields on shorter duration bonds (2-year and below) are all negative.

In other words, you lose money loaning to the German government for up to two years.  This is the period of time that the bond market is sensing maximum risk, and it may be worth considering as a final window for the euro’s demise.