Clearly we lack the intellect to question our central bank overlords 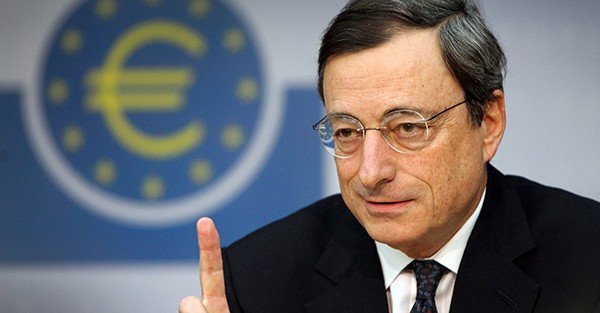 Leon Walras, one of the original economists and idiots who adapted most of his theories from the world of physics, once posited the fancy-sounding General Equilibrium Theory to explain market behavior.

“[F]inancial markets can create inaccurate expectations and then change reality to accord with them. This is the opposite of the process described in textbooks and built into economic models, which always assume that financial expectations adapt to reality, not the other way round.”

Walras spent his last years lonely, bitter and afflicted by dementia. George Soros is a billionaire.

Draw your own conclusions as to which of these theories is more likely to be correct.

“Inaccurate expectations” sounds like a pretty accurate way of describing investors’ reaction to Mario Draghi’s speech at the Economic Club of New York last week.
After his speech, several European stock markets fell by over 3.5%.

And Mr Draghi’s deputy told CNBC the following day that this happened because investors are stupid whereas central bankers are highly intelligent:

Mr Draghi on Friday also went on a damage limitation exercise, announcing that the ECB had “the power to act, the determination to act and the commitment to act.”

He is certainly acting.

“There cannot be any limit to how far we are willing to deploy our instruments, within our mandate, and to achieve our mandate.”

It is not clear whether the Great and Powerful Oz was standing behind a curtain while he said this.

This attitude of ‘father knows best’ is not unique for the unaccountable bureaucrats of central banks.

It was vividly displayed after the Panic of 1907 by the US Senator Robert Latham Owen, one of the primary founders of the Federal Reserve, who had a spectacular career of failures in banking:

“It is the duty of the United States to protect the commercial life of its citizens against this senseless, unreasoning, destructive fear that seizes the depositor when he has been sufficiently hypnotized by the metropolitan press with its indiscreet suggestions.”

Former Fed chairman Ben Bernanke once confessed that he too, like Mario Draghi and Vítor Constâncio, was sometimes too intelligent for us:

“That was actually very hard for me to get adjusted to that situation where your words have such effect. I came from the academic background and I was used to making hypothetical examples and … I learned I can’t do that because the markets do not understand hypotheticals.”

It is always tragic when we filthy peasants stop banging rocks together momentarily to listen to the awe-inspiring intellects at the central banks, only to misunderstand them.

How much confidence did Ben Bernanke declare in a 2010 interview with 60 Minutes in the Fed’s ability to control inflation? Without hesitation: 100%.

Mario Draghi claims “with confidence – and without any complacency – that we will secure the return of inflation to 2% without undue delay”.

Oh! Well he’s confident! That settles it, then. End of discussion.

Except that, if he’s so confident, why hasn’t inflation in the euro zone returned to that 2% level?

Why, for that matter, is a central banker determinedly fuelling price inflation in the first place?

But of course we lack the intellect to even to raise these questions.

Fortunately, Professors Edward Russo and Paul Schoemaker devised a simple self-test for overconfidence back in 1989.

They posed 10 questions and asked respondents to put down answers with a 90% confidence range. You can conduct this test yourself.

So for question #1, answer “I am 90% confident that MLK’s age was somewhere between X and Y years of age when he died.”

So please give a low/high 90% confidence interval:

(The answers¹ appear at the end of this commentary.)

Plous (1991) went on to test confidence in two separate groups of experts– weathermen and doctors.

Each group was given information relevant to their own discipline: weathermen were provided with weather patterns and asked to predict the weather; doctors were given case notes and asked to diagnose the patient.

The weather forecasters did remarkably well. Doctors, on the other hand, performed disastrously. While they were 90% sure they were correct, they were right less than 15% of the time.

The evidence suggests that central bankers may be much closer to doctors than weathermen, at least with respect to their overconfidence. [no offense to physicians]

QE has distorted the prices of all financial assets, fuelled growing social inequality, and enriched many within the financial sector at the expense of everyone else.

The one thing it was meant to forestall (deflation) is increasingly visible throughout the system.

Confidence in central bankers is now hanging by a thread. Mario Draghi (and his fellow Goldman Sachs alum Mark Carney at the Bank of England, for that matter) might want to adopt a little humility before that thread snaps completely.