This one chart shows you who’s really in control

Check out this chart below. It’s a graph of total US tax revenue as a percentage of the money supply, since 1900.

In contrast, at the height of World War II in 1944, US tax revenue had increased to $42.4 billion. But money supply had also grown substantially, to $106.8 billion. 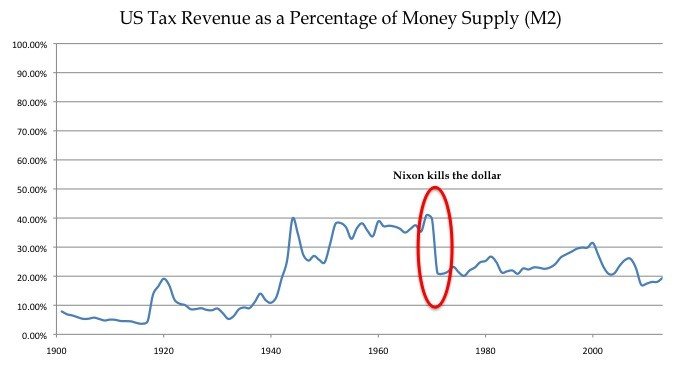 You can see from this chart that over the last 113 years, tax revenue as a percentage of the nation’s money supply has swung wildly, from as little as 3.65% to over 40%.

But something interesting happened in the 1970s.

1971 was a bifurcation point, and this model went from chaotic to stable. Since 1971, in fact, US tax revenue as a percentage of money supply has been almost a constant, steady 20%.

You can see this graphically below as we zoom in on the period from 1971 through 2013– the trend line is very flat.

What does this mean? Remember– 1971 was the year that Richard Nixon severed the dollar’s convertibility to gold once and for all.

And in doing so, he handed unchecked, unrestrained, total control of the money supply to the Federal Reserve.

That’s what makes this data so interesting.

Prior to 1971, there was ZERO correlation between US tax revenue and money supply. Yet almost immediately after they handed the last bit of monetary control to the Federal Reserve, suddenly a very tight correlation emerged.

Furthermore, since 1971, marginal tax rates and tax brackets have been all over the board.

And yet, the entire time, total US tax revenue has remained very tightly correlated to the money supply.

The conclusion is simple: People think they’re living in some kind of democratic republic. But the politicians they elect have zero control.

The fiscal revenues in the Land of the Free rest exclusively in the hands of a tiny banking elite. Everything else is just an illusion to conceal the truth… and make people think that they’re in control.