Don’t fall for this banking scam 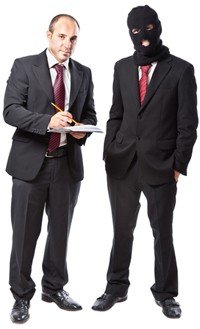 If I told you that your bank only held 1% of its customer deposits in reserve, would you feel that your money was safe?

If I told you that the insurance fund which backed your bank deposit only had enough cash to bail out 0.35% of the banking system, would that make you feel any better?

Probably not. But this scam is the reality in the US banking system… and across the West.

As an example, US Bancorp has $248 billion in total customer deposits according to their most recent reporting, yet a mere $6.9 billion in cash… roughly 2.8%.

These figures are indicative of the entire western financial system. Banks hold a very small percentage of customer deposits in cash. The rest is sitting in loans, bonds, and other securities of indeterminable value– mortgages that are still under water, shaky commercial real estate deals, etc.

Truth is, nobody really knows what’s on their books. Loan portfolios are like a black box, and the liquidity structure doesn’t leave a lot of room for error.

Think about it. If the slightest thing goes wrong– a spike in customer withdrawals, a decline in bond prices or commercial real estate, etc.– banks simply don’t have any rainy day funds set aside to handle it.

And who can blame them…? The FDIC, one of the US banking system’s chief regulators, has a mere $33.0 billion reserve fund to insure $9.3 TRILLION worth of deposits in US banks… a ratio of just 0.35%. And the FDIC is backed by the insolvent US government!

Bottom line, we simply can no longer afford to blithely assume that our bank… our most intimate financial partner… is in good financial condition.

The good news is that in 2013, it’s no longer necessary to save within the confines of our home country; it’s possible to establish a bank account in a country where the banks are actually well capitalized and liquid.

Singapore is one of those places. In fact, Singapore has ZERO net debt and has never had a banking failure in its history. Plus the banks are swimming in cash.

UOB Bank, for example, has 33.7% of its customer deposits in cash equivalents. OCBC holds 35.8%. These banks are literally 10 to 30 times more liquid than their western counterparts.

With a bit of legwork, it’s possible for both individuals and businesses to open insured accounts at either of these banks.

Today I even managed to convince one of my bankers here to open business accounts for US LLC’s… which means that anyone with a global self-directed IRA can hold retirement savings at a well-capitalized Singaporean bank. More on this soon.

The advantages of banking here are obvious; pitting the US against Singapore, there’s simply no comparison.

If everything goes fine and there are no major hiccups in the world, you won’t be worse off for holding some savings at a highly capitalized bank in Asia’s most dominant financial center.

Yet if there’s another major meltdown like we saw in 2008, or worse… these insolvent Western governments pull a Cyprus… then having funds in Singapore may turn out to be one of the sharpest financial decisions you could have made.