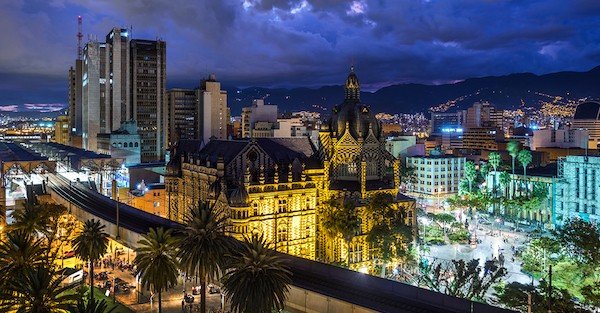 This weekend, British billionaire Richard Branson hosted a concert on the Colombian side of the Colombian-Venezuelan border.

Branson was trying to raise $100 million to help the living conditions of the millions of Venezuelans affected by the dictatorship of its president, Nicolas Maduro.

Gross economic mismanagement has led the country to the brink of collapse. The situation is so bad in Venezuela that three million people left in the past three years alone.

But Nicolas Maduro, who decries international aid as “American imperialism,” shut the border to prevent any food or medicine from entering the country.

So in good dictator fashion, Maduro went about organizing his own border festival.

But if he manages events like he manages the economy, we don’t have a lot of faith in Maduro’s ability to throw a good party…

Under his rule, and that of his predecessor, Venezuela went from the richest country in Latin America to a complete disaster.

In 2018 alone, the Venezuelan economy shrank by 18% and inflation reached a million percent.

We think Venezuela is a clear example of what happens when a country falls into the hands of socialism.

Central planning always fails– there is no way a small bunch of bureaucrats can know what millions of people need and desire at any point in time.

And while we wait for the regime of Nicolas Maduro to crumble, Venezuela is a becoming a blood-in-the-streets, chaos opportunity.

(It’s clearly too much chaos; I just postponed my planned trip to Caracas later this week after our law firm there advised that it would be ‘exceedingly difficult’ to enter the country given the border fiasco.)

Because of the government’s gross mismanagement of its state affairs, the economy is in shambles and some things, like land and property, are quite cheap.

I’ve been in touch over the last few weeks with brokers and lawyers in the country combing over distressed assets.

One asset class in particular that’s interesting is partially completed buildings. This would be a case where a real estate developer started construction on, say, an office building… but then fled the country when the building was 80% complete.

Now the bank (or some other entity) takes over the building and needs to flip it to another developer. But there are few takers.

That, combined with the fact that Venezuela’s financial system is in desperate need of hard currency, foreign investors can pick up those partially-completed property deals for almost nothing.

For 60 years, Colombia was ravaged by a civil war that saw billionaire drug lords and the FARC guerilla group cripple the government and render private and public investment in the country virtually impossible.

But in 2016, Colombia signed a peace agreement with the FARC to end the civil war. Besides a small number of “shadow narcos” – drug traffickers hiding from public sight – the age of the powerful drug cartels have all but disappeared.

The government is wasting no time to catch up on its massive lack of infrastructure investment and is building more than 8,000 miles of roads and highways, along with ports and airports.

But Colombia hasn’t yet seen a massive influx of foreign investment, so the country remains deeply undervalued… for now.

Prices around the country have started picking up, and foreign investors have begun to notice Colombia (like Norway’s $1 trillion sovereign wealth fund, the largest in the world, that started investing in Colombia in 2016).

I tend to invest in assets around the world that provide me with a huge margin of safety, should things go wrong.

Colombia is one of those places.

Property in Medellin and Cali often sells for less than the cost of construction. And land is ridiculously cheap.

And while we didn’t invest in real estate, Sovereign Man Private Investor members have already reaped enormous gains in Colombia…

In mid-2016, we invested in a small, private business in Colombia.

But the truth is, investing in these private deals can often be complicated. You’ve got to get your boots on the ground, analyze deals and do tons of due diligence.

It’s a mountain work that if done well, can be incredibly lucrative. But it’s not for everybody.

There are always other ways to buy extremely undervalued assets around the world without getting on a plane… you don’t even have to leave your living room.

You’ve just got to put in the work to find undervalued securities on exchanged all over the world.

For example, we’ve found an incredibly easy way to buy some of the best-known companies in the world at huge discounts to their market value.

Our Chief Investment Strategist, Tim Staermose, who pens The 4th Pillar, discovered a little-known security that gives you access to blue chip stocks at a 26% discount to where they trade on public markets today.

And while many of Tim’s recommendations are on exchanges in Asia or New Zealand, this particular stock trades on the New York Stock Exchange.

If you’re already a 4th Pillar Subscriber, you can get the report here…