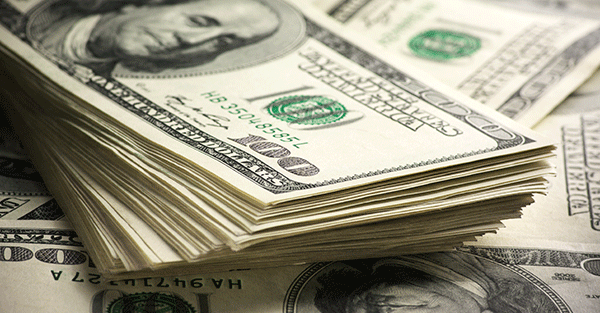 [Editor’s Note: As we’re coming up on the end of the year, we thought it would be appropriate to republish some of our most popular articles. Today’s was originally published on January 6, 2016]

Think of the word “money” for moment. What’s the first image that comes to mind?

Perhaps the folded paper in your wallet. Or the balance in your bank account.

But the relationship between them is very tenuous, and very risky. I’ll explain:

No matter where you live in the world, just about every civilized nation on the planet has some form of physical currency in various denominations. Dollars. Pounds. Euros. Yen. Renminbi.

We pass around these pieces of paper as a medium of exchange.

This is where it starts getting more complicated.

Don’t think for a second that there are one hundred thousand pieces of paper sitting in your bank’s vault. In fact most banks have very little cash on hand.

Your balance is nothing more than an accounting entry on your bank’s balance sheet, which is likely maintained in a computer database somewhere in a building with no windows.

There’s no physical ‘money’ backing up this bank balance. It’s an annotation in a computer. Every bank customer’s savings is part of this complex system of accounting entries.

When you transfer money to your kids, the bank doesn’t send them a FedEx full of cash.

They merely make an entry in the ledger reducing your balance and increasing your kids’.

The same thing happens when you swipe your Mastercard to pay for something; banks exchange accounting entries that credit the vendor’s account and debit your own.

Nothing physical ever changes hands, it all takes place in digital ledgers.

Given that this type of money exceeds physical cash by a factor of 10:1, you could argue that most modern currencies are digital.

Government bonds are another form of money that people often forget about.

Most people will keep the majority of their life’s savings in the second form of money– in the bank.

But big banks or companies like Google or Apple that have tens of billions don’t keep such vast sums sitting in the bank. Certainly not all of it.

Banks only have a certain limit on deposit insurance. In the US right now it’s $250,000… which doesn’t quite cover Google’s $70 billion savings.

These companies and institutions need a ‘safe’, highly liquid alternative to banking (i.e. they can quickly buy and sell the investment).

And that’s why they turn to government bonds.

US government bonds, in fact, are the most popular, most liquid investment in the world. You can buy and sell them in an instant.

Companies, institutions, banks, and even foreign governments around the globe buy US government bonds precisely because of this ‘cash equivalent’ status.

This means that if the Chinese government is doing a deal with an African government for $1 billion, they can conduct the transaction using US government bonds as the currency.

Right now, each of these is basically considered the same thing. It’s just different versions of the same money, i.e. $1 million in government bonds equals a $1 million bank balance equals one million pieces of paper with George Washington’s face.

But in actuality they are three entirely separate currencies: Physical cash, digital cash, and government IOUs.

AT the moment they just happen to have a 1:1:1 exchange rate, i.e. they’re freely interchangeable at parity.

But that 1:1:1 exchange rate depends on financial stability. And when there are serious problems, the exchange rate breaks down rapidly.

Think back to 2013 when the government of Cyprus froze bank accounts across the entire country. For weeks no one could access their bank balances.

Clearly in an instance like this, the value of a bank balance becomes worthless. The only way to conduct a transaction was with physical cash.

So in the event of a banking crisis, the exchange rate quickly changes. Physical cash becomes much more valuable.

It’s the same thing in a government debt crisis.

It’s bizarre to think that the bonds of a bankrupt government are a widely accepted form of ‘risk-free’ savings among institutions.

But what happens when that bankrupt government defaults, or has to restructure its debt?

The entire system breaks down. Suddenly the bonds are no longer ‘cash equivalents’, and there’s a scramble to dump them and find another safe, reliable investment.

Similarly, the 1:1:1 exchange rate quickly breaks down, just like it did recently in Greece.

This is ultimately why it makes sense to hold some physical cash.

You certainly won’t be worse off for holding some physical cash savings in a safe at home, especially since interest rates on bank balances are essentially zero.

Physical cash is by no means a panacea; it’s nothing more than a piece of paper printed by a government agency at the behest of unelected central bank committee.

Fundamentally it has zero intrinsic value other than the heat it generates in BTUs.

And in the long run all paper currencies will reach this intrinsic value, with future historians wondering with utter incredulity how we could be so silly to assign any value to paper.

But in the short term, holding at least some physical cash makes sense as a hedge against financial calamity.