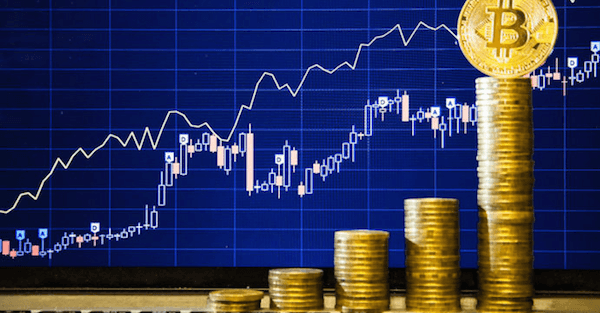 That’s how my colleague Tama Churchouse explained the rapid innovation and massive volatility in bitcoin and other cryptocurrencies.

The technology is advancing so quickly that one year in the crypto sector is like seven years anywhere else.

And the price action reflects this breakneck pace.

The crypto skeptics were calling for the end of bitcoin as the price plunged. The ideologues brushed it off as a natural correction.

The truth is, nothing goes up in a straight line. Bitcoin had gone beyond parabolic in 2017 – rising from $5,800 to nearly $20,000 in just over one month from November to December.

And the rise was largely driven by emotional, retail buyers. You probably heard the “reports” that bitcoin was all anyone discussed over Thanksgiving. Coinbase, the largest crypto brokerage, reportedly added 100,000 accounts over the holiday.

As you know, I don’t pay attention to bitcoin’s price.

I only pay attention to the supply/demand dynamics.

There will only ever be 21 million bitcoin in existence. So, ultimately, demand will drive the market.

And I believe demand for bitcoin and other cryptocurrencies will be higher in the future.

Going back to bitcoin existing in dog years… Who knows what technological advances we’ll see in the sector over the next decade.

Venture capitalist Marc Andreesen, the founder of the first, consumer web browser Netscape, says one of his biggest regrets was not building a native payment system into the web (instead, we just use our credit cards to buy goods online today).

Imagine the next time you saw a pair of shoes you liked online, you could simply click a button and seamlessly send a fraction of a bitcoin to pay for them (instead of going through the typical check out process and entering all of your personal and credit card info).

Andreesen tried to make that happen. The original hypertext transfer protocol (http) included a code for payments. For example, you’ve seen the 404 error code when a website isn’t found. But there’s also a code 10.4.3 402 designated as “payment required.” It never went live.

“It would be a Chrome extension or a fork of Firefox or Chrome that would carry a balance of bitcoin inside the browser,” Armstrong told WIRED. “Then we would create some websites—or encourage the creation of them—that would bring back the 402 code.”

Armstrong gave the example of a news site that cuts off its content in the middle, then asks if you’d like to finish reading the article. With this payment system, you could simply click “OK” and it would automatically debit a small fee from your crypto wallet.

There’s also talk in the crypto world of “tokenizing everything.” It’s just a way of securitizing assets with digital tokens on the blockchain. You could own and trade portions of cash flowing real estate, art, businesses and anything else via a digital token.

It would open up markets in historically illiquid assets and assets that are difficult to title, transfer and/or divide.

Even though the technology is advancing at a rapid pace, and the implications are staggering, it’s still likely that most crypto assets will be worthless in the future.

It’s important to consider the utility of any crypto you own or are considering buying. And you must have a bias toward quality.

In my discussion with Tama, he said he believes 2018 will be the year when the crypto markets bifurcate. Participants will start paying much more attention to the quality of the assets they’re buying… the garbage will get thrown out.

I’d encourage you to listen to my full discussion with Tama. He believes now, after the pullback, is a good time to buy “blue chip” crypto assets.

You can tune in here.