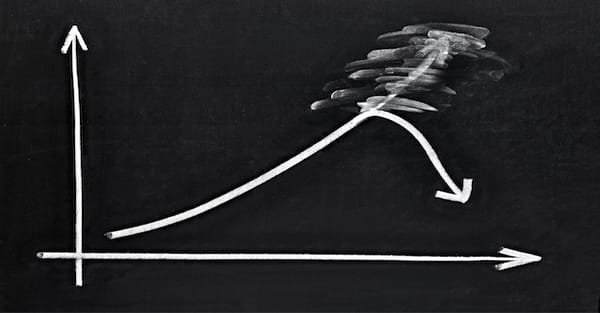 On May 23, 1719, one of the greatest financial bubbles in the history of the world kicked off when the Compagnie Perpetuelle des Indes was granted a monopoly by the French monarchy over all the trading rights of all French colonies worldwide.

The company’s stock price quickly soared, from 300 livres per share to more than 1,000 just a few months later.

It was quite a jump. But the enthusiasm continued for more than 18-months.

In fact there was such a frenzy to buy shares that it wasn’t uncommon for the stock price to double in a single day.

Based on modern-day calculations, a share price of 10,000 livres would have valued the company at more than the entire GDP of France at the time.

That would be like Google or Amazon having a $20 TRILLION stock market capitalization today. Insane.

As with all bubbles throughout history, that one burst as well… quickly and violently.

It’s pretty simple– there are certain anomalies that are too absurd to last. And nature always finds a way to correct them.

While it’s nowhere near as extreme as the Compagnie Perpetuelle des Indes, the market today is also in a completely unsustainable position.

I’ll show you what I mean–

Take a look at Exxon Mobil; it’s one of the largest companies in the world and a favorite among investors due to its 3.7% dividend yield.

Quarter after quarter, Exxon Mobile has been paying dividends to its shareholders without fail for decades, even at the peak of the financial crisis.

Not only that, but the company has generally increased its dividend each year as well.

To stock investors, that kind of consistency is a gold mine. But there’s a small problem.

For the last several years, Exxon has been borrowing money in order to maintain its dividend payments.

Last month, for example, the company reported $26.4 billion in cashflow from its business operations during 2016.

But in order to maintain the business, the company had to spend $16.7 billion on what’s known in finance as “capital expenditures” or “capex”.

Capex is critical to a big business like Exxon Mobil; every year they have to replace old machinery, purchase more land, etc.

If they don’t do these things, the business will suffer and revenues will decline.

So after subtracting the capex, Exxon Mobil had $9.7 billion remaining in “free cash flow”. Not bad.

Except that, according to the company, they paid $12.5 billion in dividends.

Hang on a sec. How is it possible that the company could pay $12.5 billion in dividends when they only had $9.7 billion in free cash flow remaining after the capex spending?

Easy. They went into debt.

Exxon borrowed billions of dollars in order to pay its shareholders a healthy dividend. And they’ve been doing this for years.

Exxon Mobil is FAR from alone.

Verizon is another shining example: in 2016, the company earned $22.7 billion from its business operations, but had $17.1 billion worth of capex.

That left $5.6 billion remaining. Yet Verizon paid $9.3 billion in dividends.

Once again, the company took on billions of dollars in additional debt.

This has been a major trend across the biggest companies in the market.

There’s nothing wrong with debt; sometimes it can be a smart move that creates value for the company.

Our manufacturing business in Australia recently took on some debt to buy some new equipment, for example.

It’s been a great decision; we’re able to generate more revenue with less cost, so the overall growth in our profit is multiples greater than the interest payment.

But borrowing billions of dollars just to pay out what amounts to sham dividends is a complete waste of money… and irresponsible.

It also means that these record high stock prices are artificial, based on debt-fueled dividends and share buybacks instead of healthy free cash flow.

This is totally unsustainable.

In addition, with an average P/E ratio of 26.5, stock valuations are at their highest level since the financial crisis; it’s yet another layer of risk in this market.

Few people ever got rich buying what was popular and expensive. But that doesn’t stop anyone from trying.

Sometimes the hardest thing to do is wait patiently on the sidelines.

But successful people don’t follow the crowd. They get out in front of the crowd, even if it means being early.