“I have come here to chew bubblegum and kick ass. And I’m all out of bubblegum.” 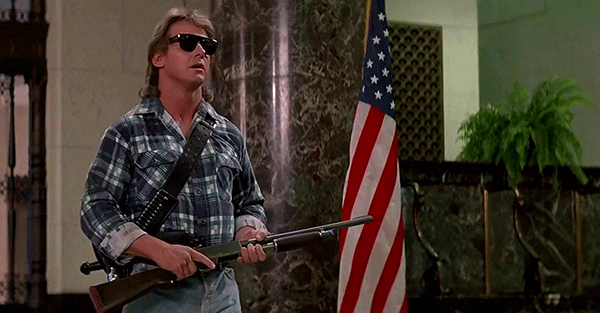 [Editor’s note: This letter was written by Tim Price, frequent contributor to Sovereign Man’s Notes from the Field, and editor of Price Value International.]

‘They Live’ may not be John Carpenter’s best film. But over time it became a cult classic, in no small part due to a robust central performance by Roddy Piper, better known as a WWF wrestler.

The plot has Roddy Piper as a drifter who comes across some special sunglasses.

When worn, these sunglasses reveal the world for what it really is. Dollar bills seen through the sunglasses, for example, carry messages like ‘This is your god’.

In the movie, society is split between an ever-widening underclass and a narrow, controlling elite (who just happen to be aliens in disguise).

And the most memorable line from the movie is Piper’s “I have come here to chew bubblegum and kick ass. And I’m all out of bubblegum.”

No, ‘They Live’ did not win any Academy Awards.

The Chicago Tribune’s verdict is probably fair: “the looniest movie of the season and also one of the most engaging”.

But seen from the perspective of the financial markets in summer 2015, ‘They Live’ looks less like dystopian science fiction and more like a state-of-the-art documentary on current western capitalism.

On this assessment, US stocks look very expensive (though explicit Fed inflationism may yet drive them higher).

So it’s only a handful of stocks are driving the US market higher. US stocks “feel” somewhat exhausted.

In the real world, people create value, make tangible things, and provide non-financial services to each other.

But on Planet Finance, securitization has entirely subsumed the real economy at 414% of GDP, and continues to grow beyond its pre-crisis peak. Did we ever have a financial crisis? Did we ever have delevering?

It took special sunglasses for John Nada to see the world for what it really was. Today’s investor only has to open his eyes.