Safety in (the right) numbers 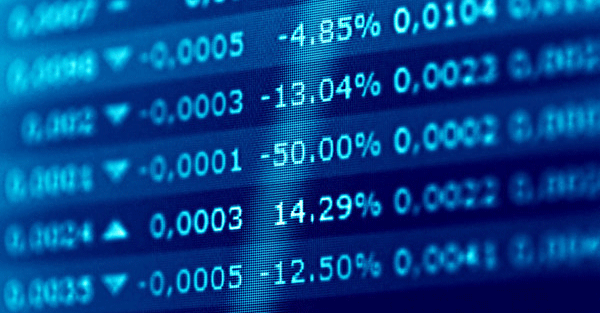 “Gross: Global yields lowest in 500 years of recorded history. $10 trillion of neg. rate bonds. This is a supernova that will explode one day.” – Tweet from Janus Capital.

Bill Gross’ warning is, of course, tautological. A supernova is an exploding star. What he probably meant to say is that the bond market is a star that will turn into a supernova one day. But then so what? At some point our own sun will die and the planet Earth will likely be engulfed by it as it explodes. Since that’s not likely to happen for roughly 5 billion years, we can probably renew our monthly travel cards with a sense of equanimity.

But then Bill Gross has form here. It was Bill Gross, modeller of sunglasses and billionaire bond investor, who suggested back in January 2010 that the UK Gilt market was “a must to avoid” and that UK Gilts were “resting on a bed of nitroglycerine.”

In January 2010, 10 year Gilts yielded 4%. They now yield roughly 1.25%. In 2010, the UK national debt was just under £1 trillion. It now stands at over £1.6 trillion. If Gilts were resting on a bed of nitroglycerine six years ago, they are now bouncing up and down, in spiked running shoes, on a bed of picric acid and octanitrocubane whilst firing flaming napalm arrows at a dartboard made of pure antimatter.

As George Cooper of Equitile tweeted some months ago,

The combination of indexing, ratings agencies and syndication means that collectively the investment industry does not provide effective discipline to borrowers.

George is being polite. Not only does the investment industry not provide effective discipline to borrowers, it allows something to happen that should be beyond the scope of rational investment markets. It actively supports negative interest rates rather than abhorring them. Allocating the blame is only part of the issue. Who, after all, is really at fault – the investors in iShares’ Swiss government bond fund, for buying an investment product of questionable utility, or iShares, for constructing it in the first place? The answer, of course: Mario Draghi. And Janet Yellen. And Mark Carney., (George Cooper is interviewed on Bloomberg for his thoughts on the wisdom of central bankers here.)

So we might collectively come to the conclusion that while the bond markets have become essentially uninvestible, the duration for this environment of uninvestibility might prove to be longer lasting than anyone, including Bill Gross, ever anticipated. The pragmatic solution is surely to seek out real assets that should hold up tolerably well in deflation but which offer the potential for participating in any ultimate reflation – rather than being destroyed by it. As we view the world, the assets that would seem to fit the bill are not bonds but equities. And rather than blithely tracking the indices with all the risk that that entails, we prefer to go the extra mile and insist on owning stocks that offer a ‘margin of safety’ by dint of trading at especially attractive valuation discounts versus the rest of the market.

The good news: such value stocks exist, albeit not necessarily in those markets that are most obviously appealing to index trackers. (The US, for example, accounts for roughly 60% of the MSCI World Equity Index, but is a) not cheap, and simultaneously b) extremely well covered by the analyst community.)

Even better news: the valuation discount to growth has rarely been bigger. We highlighted the following chart at the end of May. 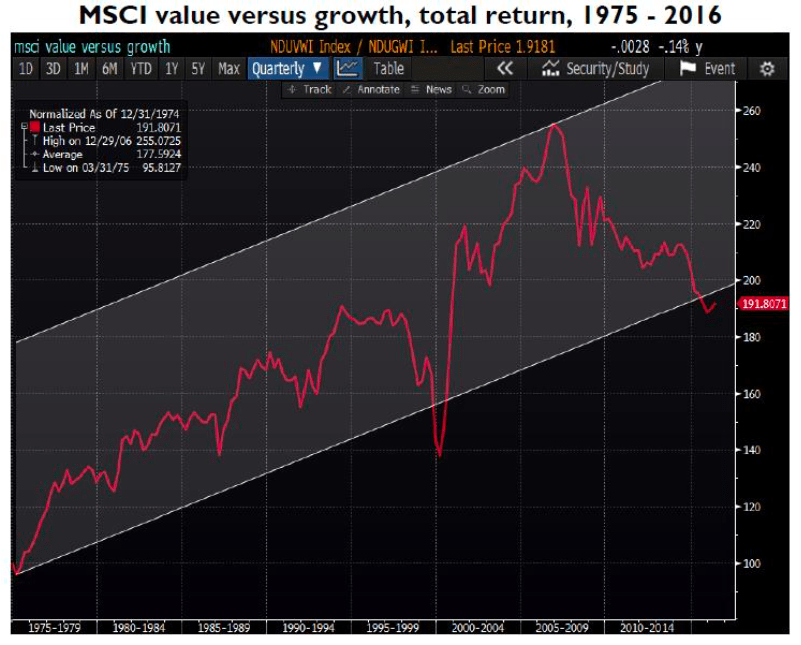 Historical experience shows that starting valuations similar to those we see today in value stocks have led to their prolonged, massive outperformance, making a strong argument for rebalancing into a deeper value tilt and avoiding the popular, bull-market growth stocks.

Human nature doesn’t change, which causes markets to oscillate between cycles of greed and fear. Though they may not seem like it, especially at their extremes, or when they’ve persisted for some time, those cycles represent opportunity. In his first edition of ‘Security Analysis’, Benjamin Graham quoted Horace:

Many shall be restored that now are fallen, and many shall fall that are now in honour.