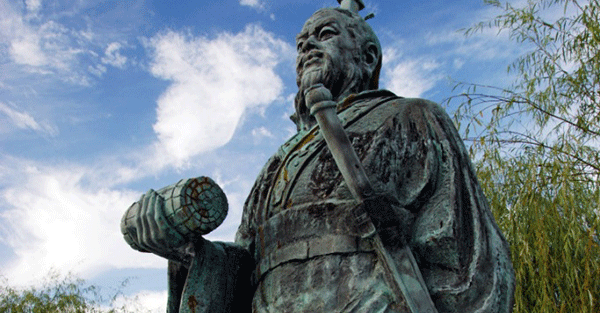 In 506 BC, the ancient Chinese general Sun Tzu was in command of a vast army of the Wu Kingdom, preparing for battle against the neighboring Chu.

Sun Tzu and his colleagues immediately sensed that the Chu army lacked the will to fight; so the general acted quickly and ordered the main attack to seize the initiative.

His surprise assault spurred a chaotic route of the Chu army, bringing an easy, low-risk victory for Sun Tzu.

This battle exemplifies Sun Tzu’s approach to military strategy, which he later outlined in his book Art of War.

Like all Chinese philosophy at the time (Sun Tzu was a contemporary of Confucius), there’s a beauty in the simplicity of his wisdom, all of which still applies today.

I was re-reading Art of War recently, and I couldn’t help noticing how much the principles apply to investing.

We’re living through some of the most insane financial conditions in modern history.

The Western world is drowning in debt, and entire nations are starting to go bankrupt despite interest rates being at record lows.

A multi-trillion dollar financial bubble in the second largest economy in the world has started to burst.

National pension funds are running out of money. Banking systems are dangerously illiquid and undercapitalized. Even central banks are borderline insolvent.

There’s clearly a tremendous amount of risk in the system.

And yet many western stock markets are crossing all-time highs with historically dangerous valuations, and retail investors are piling in like the good times will last forever.

In Chapter four of Art of War, Sun Tzu wrote that “he who is destined to defeat first fights and afterwards looks for victory.”

This is precisely what most retail investors are doing right now: they throw money at the market and hope that their stocks go up.

Expecting success from haphazard actions is as pitiful an investment strategy as it is a military strategy.

Sun Tzu continues, “The skillful fighter puts himself into a position which makes defeat impossible, and does not miss the moment for defeating the enemy.”

Victory comes from having a completely defensible position… and having the guts to seize the advantage when one is presented.

In investing, a defensible position is a strong, well-managed, highly profitable company with a pristine balance sheet and very little debt, and a stock price that trades at reasonable (or discount) valuations.

Better still, an even more defensible position is staying out of the market entirely, holding cash as you wait patiently to strike at the right opportunity.

(Chapter III- “He will win who knows when to fight and when not to fight.”)

As Sun Tzu wrote, it’s critical to not miss those opportunities to attack.

This happens from time to time when blood is running in the streets– the market presents no-brainer opportunities to buy high quality assets at a discount.

“You can be sure of succeeding in your attacks if you only attack places which are undefended.”

We’re seeing this right now with many petroleum and mining stocks, many of which are trading for less than the value of their net assets, yet still paying a dividend.

It’s basically free money– like an undefended enemy position. This is the nature of value investing.

This is how most retail investors think– like the opponent who does not know what to attack or defend.

We tend to buy what’s expensive and sell what’s cheap, instead of the other way around.

Sun Tzu again: “It is only one who is thoroughly acquainted with the evils of war that can thoroughly understand the profitable way of carrying it on.”

True words. There are countless risks out there, and it takes a tremendous amount of experience to not only understand what’s happening, but to safely profit from it.

This is what makes financial education and mentorship so paramount: investing, especially in times of epic crisis, can bring tremendous reward… as long as you have the right knowledge and experience.

The great general opens his treatise by introducing five primary factors in war strategy; and as he has told all the would-be generals for the past 2,500 years, “he who knows them will be victorious; he who knows them not will fail.”