Warren Buffett isn’t buying. Why should anyone else? 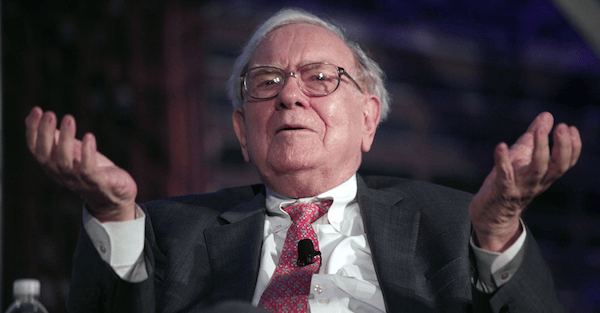 Over the weekend on Saturday morning, amid its usual fanfare and attention, Warren Buffett’s company Berkshire Hathaway released its annual report to the public.

This is a pretty big deal each year. Investors and financial reporters typically wait with baited breath to hear what the Oracle himself has to say in his legendary annual letter.

Buffett’s topics in previous letters have covered a lot of ground– the state of the US economy, value investing education, why Wall Street is so deeply flawed, commentary on financial markets, etc.

This year’s letter was, as usual, quite interesting… but primarily because of what Buffett said about his own business.

Berkshire Hathaway is an enormous enterprise; it’s essentially a $500 billion holding company that owns dozens of smaller businesses, all of which collectively generate tens of billions in free cash flow.

Buffett’s primary mission is to acquire more businesses and expand Berkshire’s portfolio… and then ensure that each of those subsidiaries has top quality management to grow the cashflow.

And that’s what was so interesting about this year’s letter: Buffett couldn’t really do his job.

According to Warren Buffett himself:

In our search for new stand-alone businesses, the key qualities we seek are durable competitive strengths; able and high-grade management; good returns on the net tangible assets required to operate the business; opportunities for internal growth at attractive returns; and, finally, a sensible purchase price.

That last requirement proved a barrier to virtually all deals we reviewed in 2017, as prices for decent, but far from spectacular, businesses hit an all-time high.

Now, consider that Berkshire Hathaway’s cash pile rose to an astonishing $116 billion at the end of 2017.

With that much money on hand, very few companies are out of Buffett’s reach.

Specifically, $116 billion would have been enough money to acquire any one of 465 out of the 500 largest companies in the United States– including Nike, Starbucks, UPS, Netflix, and Ford.

Even more, Buffett had enough cash to collectively acquire a full TWENTY FIVE of the smallest companies in the S&P 500 (including AutoNation, Staples, Bed Bath & Beyond) and still have several billion dollars left over.

Even though one of his key roles is to acquire businesses and bring them into the Berkshire Hathaway tent, he didn’t acquire a single one of those companies.

Why? Because they’re ALL overpriced.

Read that quote again: “[P]rices for decent, but far from spectacular, businesses hit an all-time high.”

He went on to write, “Indeed, price seemed almost irrelevant to an army of optimistic purchasers.”

Investors are essentially paying record prices for shares of businesses that aren’t even all that great.

Think about that: one of the richest guys in the world– one of the most successful investors in history– thinks assets are too expensive to buy.

People don’t tend to get rich (or stay that way) by buying mediocre assets at all-time highs.

The time to buy is when prices crash… when the highest quality assets can be acquired for peanuts.

And as sure as night follows day, prices will decline. Asset prices always move in boom/bust cycles.

As Buffett himself wrote in the annual report,

In the next 53 years our shares (and others) will experience declines resembling those in the table. No one can tell you when these will happen. The light can at any time go from green to red without pausing at yellow.

He knows there will always be periods of panic and fear when asset prices crash. But “[w]hen major declines occur, however, they offer extraordinary opportunities. . .”

If you want to be able to acquire the highest quality assets when prices crash, you have to be liquid. You can’t have your wealth tied up in illiquid assets whose prices have just crashed.

This is another area where Buffett’s actions speak louder than words.

Over the course of 2017, he increased Berkshire Hathaway’s cash position to $116 billion– a whopping 35% increase over the previous year.

Put these two observations together: Buffett’s NOT buying… and he’s greatly increasing his cash position.

It’s almost as if he’s preparing for a major decline… and getting ready to pounce when assets are cheap.

Actions speak louder than words. And his actions are definitely worth considering.