Why the most-recent selloff was just the beginning 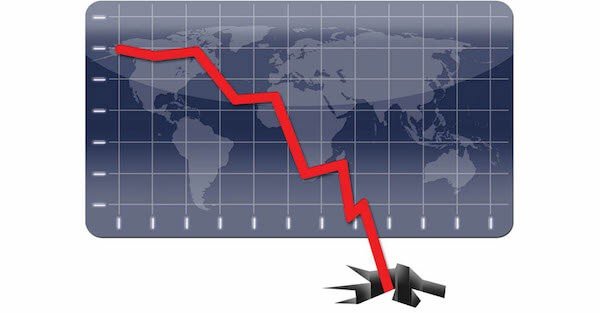 It was “Black Monday.” The selloff was so fast and so severe, nothing else even comes close.

The second worst percentage loss for the Dow was October 28, 1929 (also Black Monday) when the exchange fell 12.82%. It fell another 11.73% the next day (you guessed it… “Black Tuesday”). Then the Great Depression hit.

A lot of people blame portfolio insurance for the market drop in 1987.

Portfolio insurance was a popular product for large, institutional investors. It would “hedge” portfolios by selling short S&P 500 futures (which profit when the market falls) when stocks fall… the idea was, gains from selling the S&P futures would offset losses from falling stock prices.

The problem with portfolio insurance is it was programmatic. And when the losses inevitably came, it created a feedback loop. Selling begot selling.

But what initially ignited that selling back in 1987?

Matt Maley is a former Salomon Brothers executive who was on the trading floor for Black Monday. He shared his thoughts with CNBC last year to mark the 30th anniversary of the event.

Maley reminded us of the popularity of another strategy in those days – merger arbitrage. This was the time of Gordon Gekko, when corporate raiders would borrow tons of money – typically via high-yield bonds – to buy other firms.

Merger arbitrage is simply buying shares of the takeover candidate and shorting shares of the acquiring firm. It’s a speculative strategy that tries to capture the spread between the time the deal is announced and when it (hopefully) closes.

The merger arb guys were already on edge because interest rates had been rising, making risky takeover deals even harder to complete.

Then, out of nowhere, the House Ways and Means Committee introduced a takeover-tax bill on the evening of October 13 that, simply put, would repeal lots of tax breaks related to M&A activity.

The next day, Wednesday, shares of the takeover stocks plummeted and caught the already edgy traders off guard. The selling continued through Friday. Margin calls were triggered, forcing investors to sell even more.

After a turbulent week, mutual funds were facing massive redemptions. They were forced to start selling stock along with the merger arb guys… only in much larger size.

The plummeting stock market triggered portfolio insurance to step in and start selling tons of futures short, which only worsened the selloff.

It was the feedback loop from hell.

The point is… an unexpected bill from congress helped to push an already nervous market over the edge.

And that brings us to today…

Earlier this month, the market dropped a very speedy 10% from its all-time high.

And this panicked selling was based only on the fear of higher interest rates.

To be fair, this market has gone nowhere but up since 2010. And volatility has scraped along the bottom that entire time. People have been lulled into this false sense of security that the stock market is a safe place that guarantees healthy returns.

In short, the market doesn’t know what to do with negative inputs today… much less some really bad news.

And, just like in 1987, there is a massive amount of programmatic trading taking place. Only today, brokers don’t have to pick up the phone to place a sell order when a certain price level is breached.

Instead, we have supercomputers that trade at lightning fast speeds and process market information almost instantaneously. The automatic selling – or buying, for that matter – happens quickly. The feedback loop has sped up exponentially.

That’s paired with more and more money that has flowed into backward-looking strategies that only work during times of low to no volatility. But, as we saw earlier this month, these strategies are utterly useless when the environment changes.

Take volatility targeting for example… it’s when portfolio managers change allocations based on volatility. Coming into the recent shock, with volatility near record lows, these funds were as long as they could possibly be.

That strategy had worked great for years as the market steadily rose higher.

But when the selloff started on February 5, the VIX jumped 116% in one day (the largest move ever). And the volatility targeting crowd ran for cover, selling potentially hundreds of billions of dollars in equities.

People have also been betting outright against volatility, which again, has been a profitable strategy for years. The VelocityShares Daily Inverse VIX Short-Term ETN (XIV), which moves inversely to the VIX, was one of the most popular tools for this.

But, when the VIX jumped 116% in a day, that fund lost about 95% of its value. Then XIV announced it would liquidate (the fund had $1.8 billion at its peak). Investors were wiped out.

And it wasn’t just individual investors using this strategy… Even pension funds and sovereign wealth funds were getting in on the action as a way to generate income, which is totally absurd. These are supposed to be the safest and most conservative investors around.

In addition to all of this money chasing volatility-linked strategies, we’ve also seen a massive amount of money flow into passive strategies (which buy indexes regardless of price or value)… a lot of that money has been in the form of exchange-traded funds (ETFs).

But trillions of dollars are now deployed in this value-agnostic strategy, which means people are allocating capital simply because the trend is up. More than that, it’s in the form of highly liquid ETFs… so these investors, who don’t have high conviction in the first place, can quickly dump their position when the tides turn.

Finally, there’s more than $300 billion managed by trend-following hedge funds. And their computers sell furiously on the way down.

So all of this money has been invested on the premise that volatility won’t return to the market. The Volatility Index (VIX) had its biggest one-day move ever this month and investors panicked.

But that’s just a taste of what’s to come. Imagine the selling we’ll see when there’s actually bad news.