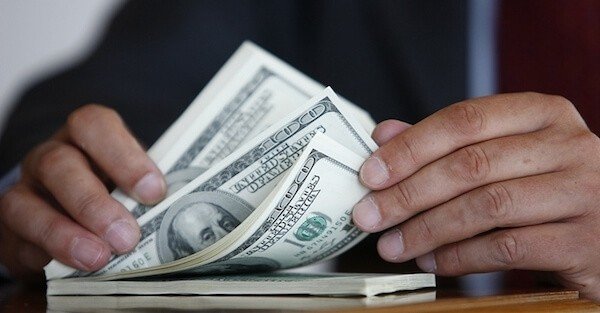 He calls himself a gentleman thief… Apollo is a renowned pick pocket, magician and mentalist who has entertained crowds for years. But I think he’s so much more than that…

He’s a zen master on human behavior. And he’s the world’s foremost expert on the very scarce resource of attention.

And the crowd was absolutely mesmerized by his demonstration of showing how effortlessly manipulated our thoughts and attention can be.

He showed us how easy it is to manufacture the illusion of control and choice in his “marks” – in this case, our audience members.

You can watch his Ted Talk to learn more about Apollo and how he controls attention, which controls reality… and also see how quickly he can steal your watch while he elegantly directs your attention elsewhere without you having any idea.

To help you understand what I’m talking about, at our event, he invited my mom on stage, along with seven other volunteers.

He asked her to pick a random phone number out of a phone book and read it aloud. As she read the number, each of the seven people on stage held up a card Apollo had given them… and it was the exact number she called out.

Obviously, it’s impossible for Apollo to predict beforehand which number, out of the tens of thousands in there, my mom would have chosen. Instead, he controlled the outcome…

My mom thought she was in control, but it was all an illusion. She was picking the phone number Apollo wanted her to pick. He framed her reality and used very subtle techniques to manipulate her actions and decision-making.

Our Total Access gathering was primarily an investment conference. I invited the CEOs of our Private Investor portfolio companies to update us on their performance and discuss plans for the future.

And the news was mostly solid.

We have one company going public at a huge multiple of where we initially invested. There’s another that’s very close to signing an eight-figure deal with a major, national chain. And there are two other deals where we’ll generate a safe, double-digit return with minimal risk.

I’m generally pleased with the results. But I think the investments we discussed in Vegas are a good example regarding the illusion of choice when it comes to investing.

When people invest their savings, they feel like they have this giant universe of options… but it’s really an illusion.

You’re just being led to the choices that the big system wants you to make. They want you to pick stocks, bonds and mutual funds – the assets they’re selling you.

These are the conventional assets that the media, “financial experts,” banks and institutions have been steering people toward for years.

What do you think the New York Stock Exchange and Goldman Sachs want from you today?

They want all the small investors out there to throw their money into the market and buy their fee-producing assets.

And they want you to buy this stuff at a time when prices are at all-time highs and the smart money is starting to exit… you’re the patsy while everybody else gets their money out.

Still, most people think they have a choice because they can choose between Netflix and Tesla, or one S&P 500 ETF versus another. It gives us a sense of control.

The reality is, we’re just being led to a decision they want us to make…

But you have far more control than they want you to believe.

And that’s not just in investing… you have far more control over everything in your life, from finances to health to education.

While the powers that be give you a couple of options and say you’re free to choose, it’s important to remember…

There’s an entire, alternative universe of better options out there.

Personally, I like to maximize my risk-adjusted returns, where my expected return is far, far greater than the risk that I am taking.

For example, I’m about to close a deal that will pay 12%+ annual interest on a loan backed by a property that’s worth 2.5x the loan exposure. And I’ve already got legal and administrative custody of the property, so it’s very low risk.

I’d much rather make investments like that than buying overpriced stocks and bonds today. Sure, stocks could go up another 20% from here… but they could also drop 40%.

Last time I checked, nobody got rich by following the crowd in buying expensive and popular assets. If you want outstanding performance, by definition, you can’t do what everyone else is doing.

Listen, you don’t have to do what I’m doing. I’m not suggesting that you do.

What I am suggesting is that the most important thing you can do is divorce yourself from the idea that you have to choose from the very narrow set of options that you’ve been provided.