Answering your questions after the wreck…

I’m actually reporting tonight from bed-side in my hotel room; I managed to crash my $3/day motorcycle rental this afternoon, and between the cracked rib and other pleasantries, I’ve decided to call it an early evening.

Fortunately for me, Thailand has some of the best healthcare in the world, at least if you’re an expat and go to the several renowned and accredited private hospitals… but more on that in future letters.  Tonight I thought I would sit down and specifically address some of your questions, which is something I have not done in some time:

Keith from Ontario recently asked, “Simon– where is your money when World War III starts?” 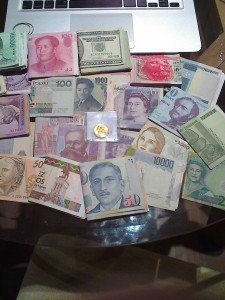 Good question. The emergency fund is in physical gold and silver, plus a lot of currency from about 40 different countries. I travel with quite a bit of it and keep the rest stashed away in some strategic locations around the world– you can read about these places in our free Gold Report.

I don’t believe that the world is going back to a barter or gold system anytime soon.  Governments like having an inflatable fiat currency, and people have become too institutionalized on worthless paper money.

If there is a future cataclysmic event that causes a worldwide currency and financial meltdown, governments and financial markets will likely engineer a substitute quite quickly. In this case, gold and silver will have been fantastic investments, but likely not needed as a hard currency for the long-term.

If, on the other hand, a major catastrophe turns the world into Mad Max, I think everyone will be wishing s/he had invested in bullets and crop land instead of precious metals.  You might want to check out a great book called Emergency by Neil Strauss for an interesting read about a potential breakdown of our social and financial system… I highly recommend it.

On the same subject, Judy asks “Do you know if Panama has right to carry in place? If you currently have RTC, is it legal to ship your gun to Panama and conceal carry it there as well?”

You can obtain a weapons permit in Panama and even import your own firearms if you have established residency.  The system is fairly convoluted, though– the permit documentation is tied directly to the firearm, not necessarily the individual, so when you buy a weapon, you have to ensure that you buy a permitted firearm.

It’s best to navigate this process with a lawyer, at least the first time you do it. Any of the attorneys I mentioned in my Panama Black Paper will be able to help you with this issue.

Amanda recently asked a question about Australia– “Simon, I’d like to know your opinion on the land down under…”

I think Australia has fantastic prospects.  I generally dislike all governments, but by comparison, the Aussies run a sound economy that normally maintains a trade surplus based on raw materials, as well as a balanced budget.

The Australian dollar has room to appreciate– unlike other countries like Japan and South Korea which depend on a weaker currency to make their exports appear cheap, Australian commodities exporters sell at world market prices, irrespective of the Australian dollar’s value.

Naturally, the country is not perfect and there are a few speed bumps with household debt and immigration policy… but overall, I think the economy is sound and the Australian dollar is a good place to be relative to other fiat currencies, especially considering the higher interest rates.

Howard writes about Thailand– “For investors and businessmen, Thailand is a culture based on deceit and power; a major business expense here is corruption payments… and nothing here is clear, honest, or straight-ahead.”

I agree entirely. Doing business in most places overseas, particularly in developing nations, is fraught with challenges (read: corruption), and Thailand is no different. More specific stories and solutions on this in future letters.

My old friend Nuckolls writes, “According to the mainstream press, California is either a failed state or a gold mine waiting to be rediscovered.  I’m banking on the gold mine future…getting in at busted prices and waiting perhaps five years for the eventual regrowth. Do you have any premonitions about how long I could be waiting for that?”

California has a couple of things going for it that are positive economic drivers– first, it is home to some key industries like entertainment and technology that are still in tremendous demand around the world. Warner Brothers and Apple set the gold standard for everyone else to follow, and this isn’t changing anytime soon.

Second, people still really want to live in California, especially people with money.  This, along with its poor credit rating, will likely force the tough political choices that are necessary for the state to get back on its feet.

Third, California property tax is low, and this is protected by the state constitution. Other things equal, this makes California one of the more attractive US property markets for long-term growth.

Between the recession, the wild fires, the massive foreclosures, and the fault lines, there are probably some great deals on property. As for how long you will be waiting? Unfortunately we have to look at these things in terms of election cycles given how interfering governments have become in the economy.

I wouldn’t expect anything until after the 2014 election, though given how bad the federal government is mismanaging the economy, an inflation-adjusted turnaround could be well beyond that.

As a final note, if you recently wrote or commented about your interest in official diplomatic programs, you will be hearing from me personally on the subject in the near future. Stay tuned.