[Editor’s note: This missive was sent in from our partner Tim Staermose in China] 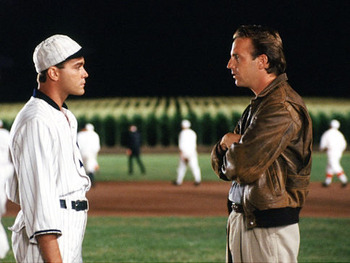 Maybe the Chinese politburo has been watching too much deep cable, and, inspired by Kevin Costner’s Field of Dreams movie, decided to churn out a bunch of empty cities. As it turns out, though, if you build it, they won’t come… and if you’ll forgive the movie analogies, these empty developments across China are turning into fields of nightmares.

I’ve been quite bearish on China lately. There are so many reports about how the Chinese economy is going to lift the world out of recession, and insatiable Chinese demand for commodities will deliver permanent good times in resource-rich countries like Australia.

I suppose that if you’re sitting on a few trillion dollars in reserves and decide to dump a lot of it into your domestic economy, it’s good for growth… at least for a while. But China is doing the 21st century equivalent of digging ditches during the day and filling them up at night.

We’ve all seen the videos of Chinese ghost cities and bridges to nowhere, but I wanted to put some boots on the ground and check it out for myself.

I started my trip In Guangzhou, and it didn’t take me long to find the first example of what I call China’s “build it and they will come” philosophy of economic growth.

Guangzhou has this new district of glitzy office towers and apartment buildings in the Tian He district called “Pearl River New City.”

It is SEVENTY percent vacant!  Prices are DOUBLE what they are in the older section of town which most people prefer living in, because there’s actually nice established neighborhoods with stores, businesses, restaurants and so on which remain affordable to average people. 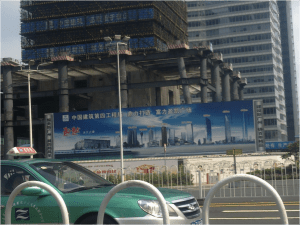 They’re still building stuff in this “New City.”  Here’s a sign that showed half a dozen of the buildings with their respective heights proudly displayed.  The whole thing only sprang up in the past few years ahead of the 2010 Asian Games which were held here in Guangzhou.  In fact, they built a brand new stadium just for the opening ceremony!

Among all the impressive new skyscrapers in the Pearl River New City, I saw at least two 5-star international hotel brands– Hyatt and Westin.  I think you’ll find that if you call them and pose as a conference organizer, they have PLENTY of rooms available.

Beneath the surface (literally) this whole new district may not be so impressive.  During heavy rains, the area floods.  Apparently the developers were not as careful about what they built underground, and the drainage and sewerage systems leave something to be desired.

Traffic was light while I drove around the area with prominent local friend; he pointed out that IF the buildings were all occupied, the sheer number of people who’d be coming and going would probably cause a traffic snarl of epic proportions.

So who’s buying all of these units? Developers keep building because people keep buying, right?  They’re all mostly investment properties. Chinese real estate “investors” don’t actually care about rental yield at all.  Indeed, most of them deliberately let their properties sit vacant.

They buy apartments as an inflation hedge and are prepared to hold them as long as it takes to sell at a profit. As the theory goes, there’s always a greater fool out there willing to make an even dumber financial mistake.

I get the feeling some of the recent buyers in Guangzhou may be waiting a very long time.
The supply of rental property in Guangzhou is so vast that rental prices are roughly half as much as it would cost you to service a mortgage on the same property.

And as I’m going to explain in the coming days with even more boots on the ground reports, this is a bubble that’s bound to pop soon. Stay tuned.