Get your hands on the government’s playbook 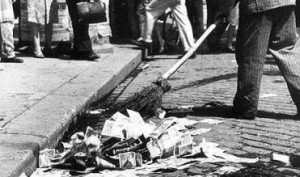 In this bubblicious world of trillion dollar deficits, sovereign bailouts, and fiscal stimulus measures of historical proportions, there is one economist whose theories and underlying philosophy underpin the foundation of modern macroeconomics.

His name is John Maynard Keynes, and his most famous work, The General Theory of Employment, Interest and Money (1936) has become the playbook from which politicians and central bankers are making their trillion dollar decisions.

Just about every politician knows the name Keynes. Most would consider themselves “Keynesian” in that they believe in government spending as a means to maintain economic stability. Few have actually read his book. And yet even fewer realize that Keynes was a major advocate of Soviet-style central planning.

Among the many fascist viewpoints in his General Theory, Keynes argued that:

1) A high rate of interest which encourages saving is bad for society.  Consumption and borrowing must be promoted. In fact, high interest rates are to blame for why “the world after several millennia of steady individual saving, is so poor…”

3) Even if inflation should happen to appear, it’s likely due to the “arbitrary and inequitable distribution of wealth and incomes…” As such, the better solution to control prices and keep the boom going is to simply impose high income and death taxes in order to make a more economically just society.

4) If the boom starts to fade and low interest rates aren’t doing the job, it is the role of the government to step in and ‘invest’ obscene amounts of money to stimulate growth. Only the government is capable of doing this, as “the duty of ordering the current volume of investment cannot safely be left in private hands.”

5) As Keynes favored “a somewhat comprehensive socialization of investment,” he recognized that such complex decisions of investing other people’s money would be “above the heads of the vast mass of more or less illiterate voters.”

6) Not to worry, though, these key decision makers of the state-run economy will have the right “moral position,” so it’s just a question of making sure that the right people are directing the economy.

7) In the event of a crisis, the answer is simple. A government should simply borrow and spend more. In a 1934 article for Redbook magazine entitled “Can America Spend Its Way into Recovery,” Keynes opened with “Why, obviously!”

8 ) If the crisis doesn’t abate after substantial spending an interest rate cuts, Keynes blames these continued problems on not following his advice closely enough: “[A]uthorities of the world have lacked the courage or conviction at each stage of the decline to apply the available remedies in sufficiently drastic doses.”

I could go on, but I don’t want to spoil the ending where the entire global financial system collapses as a result of following these ridiculous policies.

In terms of economic philosophy, very little separated Keynes from Lenin. Keynes even praised Lenin when he wrote, “Let us not belittle these magnificent experiments or refuse to learn from them… the Five Year Plan in Russia, the Corporative state in Italy…”

And yet, this is the man who is held up by world leaders as the architect for economic bliss. Politicians and central bankers are calling his plays almost verbatim– enormous stimulus packages where volume and quantity are all that matter, quality counts for nothing; interest rates at zero; spending your way out of recession; borrowing your way out of debt…

It’s absolutely mind-boggling how modern governments have built such an apparatus to control their economies and run them into the ground. Ironically, each time a crisis occurs, these regulatory agencies, central banks, and executive powers are granted even more authority. This only makes things worse.

Sure enough, in the “Seventh Quarterly Report” that President Obama’s Council of Economic Advisors released on Friday (right before a long weekend, naturally), the numbers show that the administration’s Keynesian stimulus spending has saved 2.4 million jobs at a cost of $666 billion. That’s a total of $278,000 per job, all at taxpayer expense.

In the world of Keynes where debt does matter and inflation doesn’t exist, this number is completely acceptable, right comrades? In the real world, it’s further evidence of how horrific misallocations of capital are bankrupting the economy.

To Keynes, people who work hard to create value cannot be entrusted with their own money. It must be confiscated by politicians for them to invest with the utmost objectivity and expertise, all for the benefit of society as they define in their sole discretion. And if they falter, we must reward them with even more power to tax, print, borrow, and spend.

This is the underlying philosophy of the man whose ideas have driven global macroeconomics for the last 60+ years… and continue to create inflation, bubbles, and economic ruin.

If you want to read more on the subject, I highly recommend a book called Where Keynes Went Wrong by Hunter Lewis. It’s available on Amazon in both print and Kindle edition.