The government is getting prepared. What about you?

Did you hear about the latest civil unrest in Syria? Police in full riot gear swarmed peaceful students who were staging a completely non-violent, human-chain sit-in at a university campus.

The Syrian police came up at point-blank range and hosed these kids down with pepper spray. If you’ve never been assaulted with pepper spray before, let me assure you that it is easily one of the most uncomfortable experiences you could ever go through in your entire life.

It was a truly disgusting display– meeting peace with violence and brutality. Just the sort of thing you would expect from an oppressive regime like Syria.

Except… it wasn’t in Syria. It was in California… right here in the land of the free.

This sort of thing has become totally commonplace. A few days ago, a Tampa, FL newspaper published a photograph of their local police force’s latest and greatest piece of equipment– a 12-ton armored personnel carrier (APC). In laymen’s terms, it’s basically a tank. 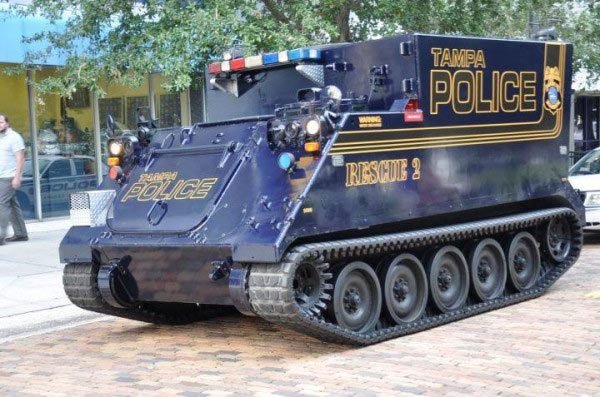 Needless to say, the cops rolled it out, proudly displaying it in an upscale Tampa neighborhood. Never mind that the APC tracks destroy city streets at taxpayer expense…

Why are they doing this? Why are so many police forces arming to the teeth, receiving federal aid, and meeting nonviolence with violence? Recent events this weekend may give us a clue.

At a NASCAR race on Sunday, both Michelle Obama and Jill Biden were booed by the crowd. This is on the heels of both ladies getting booed at Game 1 of the inappropriately-named World Series just a few weeks ago.

Halfway across the world in Moscow, Russian Prime Minister Vladimir Putin was also booed when he stepped into the ring to congratulate a fighter at a mixed martial arts match.

These minor instances are emblematic of the massive rift that has emerged between the ‘people’ and their leaders. Politicians may be completely out of touch, but they’re not stupid… and they’re taking steps to prepare.

In so many places around the world right now, anger, animosity, hostility, and anxiety rule the day. For the time being, though, the vast majority of this negativity has an outlet in the political process.

You see, between now and the end of 2012, several hundred national and provincial elections are scheduled around the world– from this past weekend’s parliamentary elections in Spain to presidential elections in Russia, France, the United States, Mexico, Finland, Iceland, India, Switzerland, South Korea, Yemen, Egypt, and more.

Consequently, people have an outlet to invest their anger and hostility. Emotions are running high, but people at least have a shred of hope that if ‘their guy’ gets elected, everything will get better.

It won’t. And, next year once the election-cycle has disappeared, there will be no more peaceful outlet for all of the anger that has been building up.

Politicians are cunning. They can see the writing on the wall, they know that social unrest is a foregone conclusion, and they’re preparing to defend the status quo at all costs.

As such, it’s no wonder why we’ve been seeing a militarization of police forces and more violent tactics to quell any measure of dissent. And we’re only going to see more.

This is the real ‘new normal.’ The state is taking steps to protect its interests. What about you?