I didn’t see this covered in any western newspaper 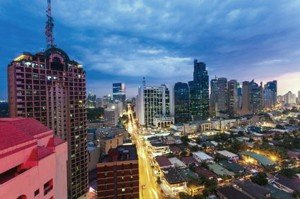 When it comes to investing in Asia, the two countries which soak up the vast majority of investment chatter are India and China. And with good reason, they’re the two largest economies in the region.

Yet one of the most compelling stories in Asia right now is an often forgotten about corner– the Philippines.

With a population of almost 100 million, the Philippines has a much larger population than Thailand. It’s a huge, growing market.

I lived in the country for nearly 15 years, and I’ve never seen the economy in better shape than it is today. Optimism is high.  The currency is strong.  Inflation is modest.  And most importantly, the economy is generating loads of new jobs.

Many of these jobs are in service sector industries such as calls centers, software development, and business process outsourcing firms that do accounting and administrative work for global businesses.

Consequently, a whole new middle class of educated young people has emerged. The average Filipino is now a 22-year-old graduate who can earn a significant income.

Demographers and development economists call this “the sweet spot.”  As these young people get married and start families, economic activity will accelerate even further.

And recently, something happened to the Philippines that will give the country an even bigger boost for years to come. In fact this one event may have been one of the biggest game changers in the country’s modern history. Yet it was barely mentioned in any mainstream newspaper outside of the Philippines.

Two weeks ago, after decades of instability and fighting, the Philippine government signed a landmark peace agreement with the Islamic separatists in the southern region called Mindanao.

The Muslim majority in Mindanao has long campaigned for a separate state on the island. Now they’re getting an autonomous region, and they’re eager to cooperate in order to attract foreign investment.

The profound impact of this peace deal cannot be overstated. You see, Mindanao is exceedingly rich in metals, minerals, and fertile soil. In a US context, it’s as if California, Nevada, Texas, and Iowa had been off-limits for decades… but then suddenly became available to investors all at once. Major potential.

One way to capitalize on this potential is to own the Philippine peso (which you can do by opening a bank account in the country).

More specifically, though, there are a handful of companies that have been patiently investing in Mindanao for years, waiting precisely for this opportunity. They are about to benefit from the peace in a big way.

I’ve been studying these companies closely and will shortly be recommending one of them to subscribers of our 4th Pillar premium investment publication; the company is small and has recently taken a beating in the market, putting it within my crosshairs. It’s undervalued, and primed for substantial growth with limited downside risk.

In case you’re unfamiliar with the 4th Pillar, this is an investment alert service I manage which specializes in a very particular set of objectives– low risk, high yield, minimal volatility.

As you know, most people hold their savings in a bank account or money market fund. It’s extremely liquid this way, and, theoretically, low risk. But you’re not earning any interest.

My system provides the same characteristics– the portfolio is designed to be very low risk and liquid. Yet it generates a whopping 15% to 25% annually.

Personally, I don’t have the appetite to take financial risks. I’ve worked hard for my money over the years, and I’ve had it with those white-knuckled gambles in the broken stock market. In fact, my first rule of investing is actually “don’t lose money.”

I’d much rather make a 15% to 25% return that is both safe and stable, instead of taking huge risks to make 100% (or perhaps lose everything).

If this concept aligns with your investment objectives, I strongly recommend you give this a read. It’s an honest, clear, no-BS introduction to the 4th Pillar. Simply the facts.

Simon and I have temporarily opened enrolment to new members– the first time we’ve done this in more than a year. Due to the niche nature of this strategy, we intentionally keep the circulation small. And as such, we’re closing the doors again tomorrow at midnight.

Once again, you can read more about the 4th Pillar and sign up here. Of course, new members will receive my special report on Mindanao as well. And even if you return the 4th Pillar for a full refund, the Mindanao report is yours to keep.

To your financial independence,