Should I sell my silver?

Silver’s rise (in US$ terms, at least) over the past several weeks has been nothing short of phenomenal. The chart has effectively “gone parabolic,” and people I’ve never met have started to e-mail me (in my capacity as a registered investment advisor) for advice on silver. 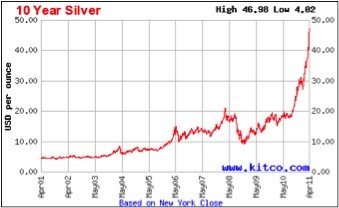 It doesn’t matter whether it’s silver, tech stocks, emerging markets currencies, or pork belly futures… any time these two events coincide (a parabolic chart pattern, and strangers asking me for advice), it sets off ALARM BELLS in my head.

I’m going to go out on a limb and say that right now, the fundamentals for silver DON’T matter. Many of the latest crop of silver “investors” have no clue about the fundamentals.

To try and divine what comes next, it’s more useful to use a general framework for understanding financial markets than to look at the supply and demand characteristics of silver. Because, right now, the market is being driven chiefly by investor psychology.

It’s a cliché to say it, but ultimately all financial markets are driven by fear and greed. Actually, I’d argue that they’re driven almost exclusively by fear. Let me explain…

In the initial stages of a bull market, it’s the fear of the unknown that keep the masses out of an asset class. They think to themselves, “Yes. I can see it’s cheap. I can see the fundamentals stack up. But what if, blah blah blah. Why is no one buying it? There must be something wrong with it. Best to steer clear.”

For those who overcome this initial fear, or skepticism, and do get into the market, once it starts going up and they have a profit, once again their primary, over-riding emotion is fear… fear of losing their profits. Or, even worse. The fear of a profit turning into a loss.

So, what do most of them do? They sell out for a small profit. That’s why it is said that bull markets are constantly climbing a “wall of worry.” And that’s why ALL markets have corrections. Corrections happen when enough people are FEARFUL of losing the gains they’ve made so far, and start to sell out in large enough numbers to temporarily reverse the trend.

Near the top of a bull market, when most have finally overcome their skepticism, and the savvier participants have taken advantage of one of the numerous corrections to buy into the market, fear again comes to the fore.

For those not in the market yet, even at this late stage, what finally pushes them in is the FEAR OF MISSING OUT.

All their friends and colleagues are cleaning up in the market. How stupid they would look if they don’t get a slice of the “easy money” too. And so, they pile in like lambs to the slaughter.

I don’t think we’re at that point — yet — with silver. But we are at the stage where many people who are already in the market are FEARFUL of losing their profits.

On this basis, as a student of market psychology, I suspect a correction is overdue.
Again, I don’t claim to have any specific fundamental insight into the silver market. I am speaking from a general standpoint.

So what should you do?

If you own physical silver, the logistics of taking profits on your stash are probably quite complicated. Shipping, and converting a large amount of physical silver to cash temporarily, may not be straightforward.

But there are other ways to soothe your “fear of losing your profits.” You can buy temporary insurance against a correction. Or, if don’t actually own any silver at the present time, you can speculate on a correction.

Long-term ETF positions are risky, but you may consider a short-term position in the ProShares UltraShort Silver ETF (ZSL on the New York Stock Exchange). This instrument is designed to move TWICE as much as silver bullion, but in the OPPOSITE direction.

For example, if silver falls 5% in a day, this security should GAIN 10%. Of course, it works both ways. If silver keeps on rising, then the price of ZSL will lose twice the amount silver rises by.

During this bull market, silver has already seen one “correction,” during the financial crisis, of more than 60%. That was an anomaly. But, a typical 10% or 20% correction would not be surprising to see at some stage — quite possibly soon.

Any time any market has gone parabolic, it has played out that way. (Indeed, a correction may already be underway as I write. I’ve just checked and I see silver is off by more than 3% in Asian trade).

Just so you know, my own money is where my mouth is. I’ve personally bought some call options on ZSL which will make me a tidy gain if silver suffers even a modest pull-back– I put the trade on early in the day on Monday with silver above $48.

I’ll have much more to say on silver, and other precious metals, in future missives, as we see how events unfold.