I’ve stopped briefly for a quick lunch en route to Andorra, which is a scenic three hour drive due north from Barcelona. The spot that I picked to stop and write to you is absolutely stunning. 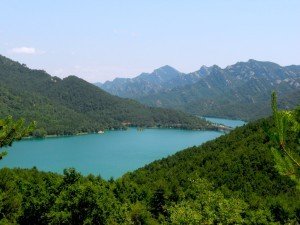 When I first started traveling years ago, I fell in love with Barcelona and the Catalan region of Spain. Part of it is the beauty, and part of it is the area’s staunch independence.

In a way, Catalonia is much like Quebec in relation to Canada– these people have their own language, their own culture, and they don’t take kindly to those bureaucrats in Madrid telling them what to do.

I tend to pass a fair amount of time in Spain and usually find myself here for odds and ends business matters. The last time was almost precisely a year ago when Matt and I were attending the most fantastically bizarre function at a remote, mountainous monastery in Catalonia.

Supposedly it had something to do with diplomatic positions for a government in exile, though to this day I have no idea how the costumes, chanting, and rituals fit in. Think ‘Eyes Wide Shut’ without the sex.

Anyhow, since I arrived to Spain a few days ago from London, I’ve been sniffing around to get a sense of how Spain’s crisis is unfolding. We see the news clips and YouTube videos of protests, of governments collapsing, of soaring unemployment, but I wanted to see for myself how feels on the ground, and how things have changed over the last year.

The most startling change that I’ve noticed, without doubt, is the inflation.  Literally everything I’ve looked at– food prices at the local market, restaurant tabs, local electronics, highway tolls, raw material construction costs, mobile phone tariffs, taxi fare, etc. are much more expensive, to the tune of 10% to 25%.

So much for the theory that an economic slowdown would decrease prices.

John Maynard Keynes, who is consistently held up as the father of modern macroeconomics, suggested in his General Theory that keeping interest rates low and government spending high in order to sustain a boom (or get an economy moving again) would likely NOT result in inflation.

This has been the underpinning economic theory behind worldwide government efforts since the Lehman collapse… it’s the old “spend your way out of recession” play. Politicians and central bankers alike seem to believe, as Keynes did, that inflation is a low risk consequence.

Spain is one of many examples that proves this theory to be utter nonsense.  Everyone on the ground knows that inflation is high; local newspapers are even running stories about how to best deal with inflation and preserve your savings.

As an aside, I should mention that I read one such article in a popular newspaper called Money Market in which the reporter interviewed several top fund managers and asked each of them how individuals should preserve their savings.

Most of them responded with the same dangerous herd mentality– buy stocks. How many recommended gold or silver? Zero. This is a bullish sign for precious metals.

Among other things I have noticed is the decline in service. Part of the reason Spain’s unemployment rate is so high is because it is so costly and bureaucratic to keep employees. Payroll taxes are quite high, so businesses have laid off their workers en masse.

You notice it instantly when you try to buy something at a retail shop or restaurant; there may be one person working for dozens of customers, and it takes forever to get anything done.

The other thing that has me quite concerned about Spain is the police presence. I don’t think I ever went 5 blocks in Barcelona without seeing a cop on the street. What’s more, they don’t just stand there waiting for something to happen, they’re actively going around harassing people.

My assessment is that the government is intentionally having the police turn up the heat on their intimidation tactics in hopes of squashing any future rebellion before it happens. They want to instill a sense of fear in the society to keep everyone quiet.

On that note, the most interesting part of this trip so far has been passing through small towns outside of Barcelona that are starting to circulate pesetas again– Spain’s pre-euro currency.

Apparently quite a few people have woken up to the euro’s fundamental weakness and begun circulating an alternative within their local, internal economies. The post-euro future is already here in Spain, it’s only a matter of time before the rest of the continent catches up.

Overall, the situation in Spain is not as dire as in Greece, which is literally burning at the moment. But Spain is running out of cash quickly, and its Keynesian bubble deflating rapidly. There will be a time, probably this year, when the country will need to secure emergency funding just to keep the lights on, and that’s when things will really start to fall apart.