It begins: German bank charging NEGATIVE interest to its customers 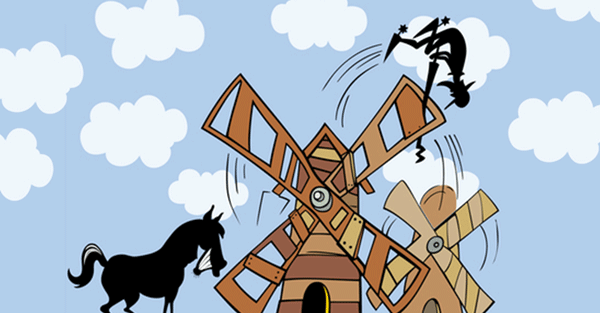 Don Quixote is easily one of the most entertaining books of the Renaissance, if not all-time. And almost everyone’s heard of it, even if they haven’t read it.

You know the basic plot line- Alonso Quixano becomes fixated with the idea of chivalry and sets out to single-handedly resurrect knighthood.

His wanderings take him far across the land where he gets involved in comic adventures that are terribly inconvenient for the other characters.

All of this is based on Don Quixote’s completely delusional view of the world. And everyone else pays the price for it.

Miguel de Cervantes’ novel is brilliantly entertaining. But the modern-day monetary equivalent is not so much.

Central bankers today have an equally delusional view of the world. Just three months ago, Mario Draghi (President of the European Central Bank) embarked on his own Quixotic folly by taking certain interest rates into NEGATIVE territory.

Draghi convinced himself that he was saving Europe from disaster. And like Don Quixote, everyone else has had to pay the price for his delusions.

On November 1st, the first European bank has passed along these negative interest rates to its retail customers.

So if you maintain a balance of more than 500,000 euros at Deutsche Skatbank of Germany, you now have the privilege of paying 0.25% per year… to the bank.

We’ve already seen this at the institutional level: commercial banks in Europe are paying the ECB negative interest on certain balances.

Now we’re seeing this effect bleed over into retail banking.

It’s starting with higher net worth individuals (the average guy doesn’t have half a million euros laying around in the bank). But the trend here is pretty clear– financial repression is coming soon to a bank near you.

It almost seems like an episode from the Twilight Zone… or some bizarre parallel universe. That’s the investment environment we’re in now.

Bottom line: if you’re responsible with your money and set some aside for the future, you will be penalized. If you blow your savings and go into debt, you will be rewarded.

If we ask the question “cui bono”, the answer is pretty obvious: heavily indebted governments benefit substantially from zero (or negative) rates.

Case in point: the British government just announced that they would pay down some of their debt that they racked up nine decades ago.

In 1927, then Chancellor of the Exchequer Winston Churchill issued a series of bonds to consolidate and refinance much of the debt that Britain had racked up from World War I and before.

This debt is still outstanding to this day. And the British government is just starting to pay it down– about $350 million worth.

Think about it– $350 million was a lot of money in 1927. Thanks to decades of inflation, it’s practically a rounding error on government balance sheets today.

This is why they’re all so desperate to create inflation… and why they’ll stop at nothing to make it happen. (It remains to be seen whether they’ll be successful, but they are willing to go down swinging…)

What’s even more extraordinary is how they’re trying to convince everyone why inflation is necessary… and why negative rates are a good thing.

On the ECB’s own website, they say that negative interest rates will “benefit savers in the end because they support growth and thus create a climate in which interest rates can gradually return to higher levels.”

I’m not sure a more intellectually dishonest statement could be made; they’re essentially telling people that the path to prosperity is paved in debt and consumption, as opposed to savings and production.

These people either have no idea how economies grow and prosper, they’re outright liars, or they’re completely delusional.

I’m betting on the latter. Either way, this assault on windmills has only just begun.

As Don Quixote himself said, “Thou hast seen nothing yet.”