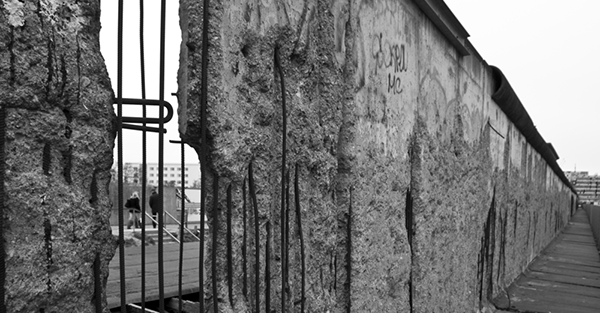 It started off as a simple border checkpoint to keep what Soviet Foreign Minister Vyacheslav Molotov called “Western agents” out of East Berlin.

Then they erected a barbed wire fence and started using a system of official travel passes to cross the new border. East Germans who wanted to visit West Berlin needed to first be granted permission.

Soon the bureaucracy behind obtaining one of these passes become practically insurmountable. And they started issuing fewer and fewer of them.

People still found a way out. And by 1961, the East German government maintained that it had no intention of building a wall.

Later that year they formally closed the border and installed an improved security fence; the East German army tore up huge sections of road to make approaching the fence by vehicle nearly impossible.

Then, for more than a decade, they constructed increasingly sophisticated ramparts, including 45,000 sections of reinforced concrete, each more than 12 feet high.

All along the way the government had told everyone it was for their own good. Their security. The government needed to protect them from all the evils of the outside world, and everyone would be safer with a giant wall.

At that point people were clearly trapped. There had been years of warning signs… slow, gradual steps towards totalitarianism.

Those who remained behind gradually became accustomed to the new rules. Until one day they woke up to find that the country they were now living in was completely unrecognizable.

But by then it was too late, and millions of Germans were trapped in a failed Communist experiment.

It took three decades, but the Berlin Wall finally opened up on this day in 1989. And back then the Land of the Free was an entirely different place.

Freedom has clearly taken a nose dive. Back then, the government didn’t make its people terrified of men in caves. Combat-clad paramilitary forces weren’t deployed across the country to intimidate citizens and confiscate assets at gunpoint.

But from an economic and monetary perspective the landscape has changed even more dramatically.

The Federal Reserve’s balance sheet in 1989 totaled less than $285 billion.

Interest rates in 1989 were 8.25%, substantially higher than the rate of inflation.

And back in 1989, the rest of the world had tremendous confidence in both the US dollar and the US government.

The rest of the world (led by China) is actively starting to abandon the dollar and build alternatives to the US-dominated financial system. In fact, Canada just became a renminbi hub, following the path already set by Europe.

The Fed’s balance sheet today is a whopping $4.5 trillion, and interest rates are being held to 0%… well below the rate of inflation.

And of course, US debt has exploded to $18 trillion, well over 100% of GDP. The government is insolvent, major programs like social security are insolvent, and it all gets worse with each passing year.

In response, the US government continues to engage in confiscatory policies.

They hunt for every tax dollar they can get with aggressive furor.

When US taxpayers follow the government’s own rules and engage in legal, rational practices to minimize their tax burdens, the government now sets aside its own laws and issues decrees (Executive Orders) on a retroactive basis to go back in time and expropriate people’s assets.

And the US government continues to levy huge fines against foreign financial institutions (to the tune of billions of dollars) simply for engaging in practices they don’t like.

They’ve turned their tax agency into global bullies who threaten and intimidate the entire world, throwing their own citizens in jail for failing to file simple disclosure forms.

They’ve even imposed a huge exit tax for people who wish to permanently divorce themselves from this system, and charge substantial fees for going through the process to renounce US citizenship.

This is NOT how a free society is supposed to operate.

As a result of many of these practices, many foreign banks and brokerages simply no longer want to deal with US customers anymore. The risks and compliance costs are far too high.

Consequently, these policies have had the net effect of reducing people’s ability to move money overseas.

In a way, their funds are being increasingly trapped in a system where you have almost zero good options.

Bank deposits guarantee that you’ll lose money when adjusted for inflation. Stock and bond markets are at all-time high nosebleed levels. Many banks are still under-capitalized. The government is able to confiscate your assets with a few mouse clicks. And the dollar remains in precarious condition.

Yet if you try to move your money abroad to greener pastures, you’ll find far fewer options available than ever before.

In this way, whether intentionally or not, they have encircled your savings with a sort of financial Berlin Wall.

This Wall is invisible. And it’s been erected with a stroke of a pen instead of the labor of men. But still the same, capital (at least at the individual level) is increasingly finding itself trapped in a failed system.

There are still options to move some savings abroad and out of harm’s way. For now. How long does one wait?