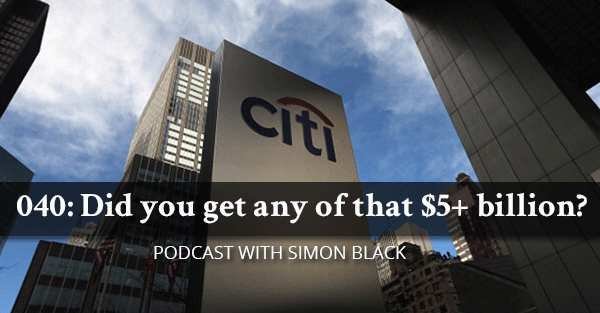 Yesterday it was reported that some of the largest banks in the world were slammed with yet another stiff fine by the United States government.

This time it amounted to roughly $5.7 billion, after the likes of JPMorgan, Barclays, Citigroup and RBS admitted to criminal wrongdoing in years of manipulating currency markets.

The word “crime” is derived from the Latin word crimen. In their day, Romans were incredibly creative at dealing with their own criminals: crucifixion, torture, beheadings, were all commonplace. Some people were put into sacks with wild animals and then thrown into the river.

The bankers being charged now had spent years abusing the public trust.

They traded against their own customers for personal gain; they used sensitive information entrusted to them to manipulate markets; and now, all they’re going to get is a fine and a slap on the wrist.

It’s unlikely that anybody is going to go to jail, or that any individual will be held accountable—except for potentially a token scapegoat.

What’s even more interesting is that after defrauding the public for so many years, the fine that they pay goes to the United States government.

How much of that $5.7 billion did you get? Because I didn’t get any, and I’m not going to hold my breath waiting for my share.

It’s so ironic that after years of admitted criminal wrongdoing, the banks stroke a check to the government that will ultimately end up right back in their pockets.

Remember, when the US government borrows money to indebt future generations, the Federal Reserve then conjures money out of thin air to loan to the banks for free.

The banks then turn around and—through the “primary dealer system”—loan that money to the US government at interest.

The US federal government paid $430 billion just in interest last year on its prodigious debt.

Or they’ll get it when the taxpayers have to step in and bail them out yet again.

Even if neither of those things happen, Uncle Sam is would still blow this money on more bombs, more drones, and more destructive wars overseas.

All while the people who were robbed by the banks never see a penny of it.

How did such abuses of the public become tolerable? I invite you to click below to tune in to today’s podcast, in which I discuss this complex, corrupt, and self-serving system.