Getting Polish Citizenship By Ancestry in 2022 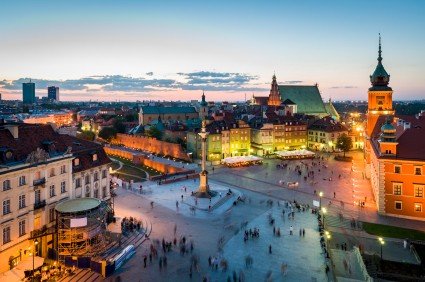 Got Polish ancestors? Even if your great-grandparents were of Polish descent, you could be eligible for second citizenship and a Polish passport on the basis of ancestry. Let’s get into the details below…

The Polish passport is a powerful travel document, offering visa-free access to a whopping 156 countries. (We give it an “A-grade” in the Sovereign Research Passport Ranking.) The country is also part of the European Union and the Schengen Area.

Combined with its central European location, cultural flair and very reasonable cost of living, it is a compelling Plan B destination – and especially for those with Polish ancestry.

Today, almost nine million Americans have Polish roots. Only descendants of Germans, the Irish, English and Italians outnumbered Poles during the 2000 Census.

And if YOU are one of those people, you may have the right to claim your own Polish passport.

Moreover, since Poland is a member of the European Union, you would not only be gaining a prized travel document… You would also be gaining access to the rest of the continent for living and working. And your children can study in any EU country, too.

Poland enacted Citizenship By Ancestry related legislation back in 2004. According to Article 14 of the Polish Citizenship Act (unofficial English translation), Polish citizenship will be bestowed on a child at birth if either of their parents are a Polish citizen at the time of their birth, and regardless of where the child is born.

(These are the rules today. As you will see below, they were very different in the past.)

But it’s also possible to become Polish if your earlier ancestors (i.e. further back than your parents) once boasted Polish nationality.

The good news is – there is no rule about when your ancestor should have been born, or when they should have emigrated from Poland. And there is no limit on the number of generations that can separate you from your Polish ancestor.

Furthermore, your ancestor does not need to have emigrated from the territory of modern-day Poland for you to qualify. If they lived in the region that was part of Poland before the Second World War, that would work too, even if the territory has since been lost.

Poland’s territorial gains and losses as a result of WWII

And your ancestor doesn’t even need to have been a “proper” Polish citizen.

In this case, you can prove that your ancestor was indeed Polish by showing that they were born in Warsaw, for example, and perhaps paid taxes there.

The program requirements are complex and confusing

On the not-so-bright side, the Polish Citizenship By Ancestry program works differently from most of the other countries we’ve featured thus far.

To be frank, the clauses and conditions are maddening. We’ve never seen anything as complicated before. Thus, it will be imperative that you work with an expert who can quickly assess your chances of success before proceeding.

(NOTE: Sovereign Confidential members, we have excellent contacts on the ground, so reach out to us if you’d like a reference.).

In Poland, you don’t claim the citizenship that your ancestors lost a long time ago. To qualify, you need to ensure that the Polish citizenship link has never been broken across generations.

Your ancestor’s Polish citizenship must have been passed from generation to generation until it reached you. So technically, all the Polish Citizenship By Ancestry program does is confirm that you have been a Polish citizen all along, even if you and your parents didn’t know it.

You don’t claim or ask for it back, and thus, there is no language or history test of any sort.

Naturally, this disqualifies a lot of folks whose Polish ancestor lost their Polish citizenship for one of the many reasons (discussed below) before passing it to their kids.

Still, given the benefits of holding a Polish passport, it’s well worth investigating if you have Polish heritage.

How the program works

Poland’s legislation embodies many of the quirks of this period’s laws, informed in large part by the specter of a world war. That’s why some exceptions, which may seem sexist or illogical on the surface, ultimately make sense.
As we already mentioned, your Polish ancestor’s date of birth is not critical, and they may have left Poland even in the 19th century.

But if their child was born outside of Poland before 1920*, then that child would not inherit Polish citizenship at birth. The citizenship chain is therefore broken, and you would not qualify.

(*The year 1920 is when the first Polish Citizenship Act came into existence and made inheriting Polish citizenship possible.)

Another rule worth mentioning, along with some good news – if your ancestor left Poland between 1920 and 1951 and naturalized in another country, they would generally still have retained their Polish citizenship.

But there are other pitfalls to watch out for – and a number of ways in which your ancestor could have lost their Polish citizenship.

We cover these exceptions, as well as the rules for male and female ancestors, in great detail in our recent 58-page Sovereign Confidential Black Paper, which covers Eastern Europe’s ancestral citizenship programs in detail.

There are a lot of nuances to the program, but this Black Paper can help you navigate the program with greater ease. Recruiting the services of a Polish lawyer familiar with the ancestral citizenship program would be highly advisable. COVID has also had an impact on processing timelines. Today the expected application timeline has doubled to six months – which is still very reasonable.

Applying for Polish ancestral citizenship is going to require quite a bit of research and effort on your part, especially if you’re planning to do it without professional help.

But once you get your Polish passport, the effort required should be well worth it. And there will also be no need to renounce your current citizenship(s), as Poland recognizes dual citizenship with no restrictions.

Who is eligible for Polish citizenship?

People whose ancestors were born in Poland qualify for Polish citizenship by descent. Essentially, you need to have at least one ancestor who was born in Poland (or one of the former Polish territories) and resided there after 1920.

Is it difficult to get Polish citizenship?

As long as you can prove the required connections with your Polish ancestor – and the citizenship has been duly passed from one generation to another – you are considered eligible for Polish Citizenship.

In fact, the Polish Citizenship By Ancestry program just “confirms” that you have been a Polish citizen all along.

Still, the process of granting Polish citizenship by descent is complex, and it can take up to a year or more to be completed, so it’s crucial to be patient. And getting support from a Polish citizenship lawyer may be essential to accelerate the application process.

How can I obtain Polish citizenship?

There are five methods of acquiring Polish citizenship:

How long does it take to acquire Polish citizenship by descent?

If you’re applying for Polish Citizenship By Descent to the Polish government, the whole process can take six months or more. In order to apply for Polish citizenship, you’ll have to obtain Polish civil records certificates, such as birth certificates and marriage certificates (if applicable), among other key documents.

Do I qualify for Polish citizenship if my spouse is Polish?

Still, as a spouse of a Polish citizen, you can easily obtain Polish residency and naturalize there the normal way – after living in the country for at least four years, and being married for at least three.

Are my children and grandchildren eligible for Polish citizenship by descent?

In general, your children and grandchildren are eligible to apply for citizenship. Your minor children (under the age of 18) can be included in your application for Polish citizenship by ancestry automatically.

If your children and grandchildren are 18 or older, they will need to go through a separate application process.

Can other family members use the same application?

All living ancestors in your family tree who are in a direct line between you and your qualifying ancestor of Polish origin are eligible to apply for Polish citizenship.

If you are married or have children, your spouse can obtain a residence permit to live with you, and your children are eligible for Polish citizenship.

Do I need to speak Polish to qualify for Polish citizenship?

You do not need to speak Polish in order to apply for Polish citizenship – if you’re applying on the basis of ancestry. You are only required to submit proof of your lineage to a Polish ancestor.

Although Polish language skills are not necessary to have your citizenship confirmed, you may need help preparing the application as the process is carried out entirely in Polish.

Can I apply for Polish citizenship in English?

Unfortunately, the application must be submitted in Polish. All your ancestral and personal documents, forms, statements, and archival records must be translated into Polish by a sworn translator.

Will I need to move to Poland to become a Polish citizen?

No, you won’t. If you are a Polish citizen by descent or ancestry, the process of granting Polish citizenship does not require you to move to Poland.

As there is no residency requirement, you won’t be obliged to go to Poland at any time during or after the application process.

Can I immediately get a Polish passport?

Can I live and work in other EU countries with a Polish passport?

Yes. Since Poland is a EU country, citizenship there will allow you to live and work in any other EU country, plus members of the larger European Economic Area – Iceland, Liechtenstein and Norway.

What EU countries can I work in with a Polish passport?

In addition, you can also live and work in Iceland, Liechtenstein and Norway  – which are all European Economic Area (EEA) countries. The above EU countries are also part of the EEA.