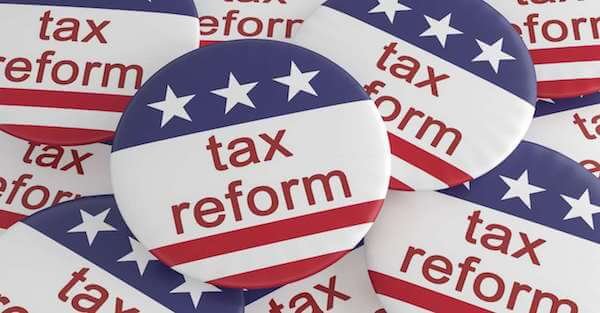 On October 3, 1913, US President Woodrow Wilson signed the Underwood-Simmons Act into law, creating what would become the first modern US income tax.

The legislation (at least, the income tax portion) was only 16 pages and imposed a base tax rate of just 1%.

The highest tax rate was set at 7%– and it only applied to individuals earning more than $500,000 per year, which is about $12.6 million today according to the Bureau of Labor Statistics.

Tax rates moved up and down over the years– the government raised rates to fund World War I, then lowered them in peacetime.

Back then, making major changes to tax law was pretty simple. Today, thanks to heavily vested interests on all sides, it takes a miracle to make any serious modifications to the tax code.

That’s why there hasn’t been any significant tax reform in the Land of the Free since Crocodile Dundee was the #1 movie in America (that’s 1986, by the way).

There are now two versions of legislation that will make major changes to the US tax code– one in the Senate and one in the House of Representatives.

I spent most of the nearly 30 hours of travel time during flights over the past week from Santiago to Sydney, Sydney to Bangkok, and Bangkok to Singapore, reading the proposals’ 400+ pages.

The media is touting these bills as a ‘major overhaul’ and ‘comprehensive reform,’ and financial markets have been treating this legislation as if the second coming of capitalism is walking across the water.

Sure, there are a few significant changes.

Tax rates on certain business profits are going down substantially.

Undoubtedly there are plenty of positive changes in this proposed tax code.

There are also plenty of negative changes.

Some people will benefit. Others will see their tax bills grow.

But for the most part the tax code will stay the same– they’re essentially just rearranging the pieces on the board rather than coming up with an entirely different game.

The existing tax code is built on a legal framework that goes back to the 1950s… a time when manufacturing and agriculture were economic mainstays.

Businesses rarely outsourced their production back then or even thought about selling their products overseas.

Entrepreneurship was uncommon. Employees often remained with the same company for decades. And few women were in the labor force.

And it’s easier than ever before in human history to start a business, sell products and services worldwide, and even hire employees who live on the other side of the planet.

It seems ludicrous to govern the digital, global businesses of the 21st century with such an antiquated, industrial-era tax code.

True reform would have started by throwing all of it in the garbage, right where it belongs.

You wouldn’t even have to reinvent the wheel; there are plenty of great examples in the world of tax systems that work extremely well– like right here in Singapore.

Singapore’s government is awash with cash.

But at the same time they encourage people to become wealthy, ensuring that they keep the vast majority of what they earn.

Tax rates in Singapore are quite low and incredibly competitive. Whereas the US corporate tax rate may drop to as low as 20%, in Singapore a company pays no more than 17%, and typically less than 10%.

Right now I’m in the process of negotiating the sale of an asset we purchased here a couple of years ago which will likely produce several million dollars in net realized gains once the deal is closed.

But we won’t pay a dime of tax here on any of it… because Singapore does not tax capital gains.

It’s a model that works: Singaporeans have one of the highest standards of living in the world… plus there are more millionaires per capita here than in any other country.

And this country is just one example. There are plenty more.

Point is, while it’s nice that they’re trying, it’s going to be very difficult for the US government to achieve anything meaningful or truly revolutionary when they’re essentially just making some changes to the pitifully outdated, existing tax code.

But the good news is that, even though the euphoria and expectations about this new proposal are totally overblown, there are still plenty of gems from the current tax code that aren’t going anywhere.

For example– if you’re a self-employed professional and you’re worried that the new tax code will probably increase your tax bill, you still have some excellent options.

There’s nothing in the proposed law that changes, for example, the substantial tax benefits you can realize from establishing a solo 401(k) or SEP IRA plan.

Nor did I see anything changing the enormous benefits from setting up a captive insurance company (in which you effectively insure yourself against certain risks, shielding up to $2 million per year from taxation).

Those are still fully intact.

So is the US federal tax exemption for certain legal residents of US territories. Which means that you can still qualify for Puerto Rico’s ultra-generous 0%/4% tax incentive programs.

There are dozens of other great tax strategies from the old tax code which will remain.