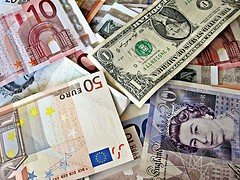 In the 13th century, Marco Polo wrote with utter astonishment at the paper currency standard he witnessed in China:

“[a]ll these pieces of paper are, issued with as much solemnity and authority as if they were of pure gold or silver… and indeed everybody takes them readily. . .”

In the Europe of Marco Polo’s day, ducats and florins were considered money by anyone with half a brain.

Yet today, this paper currency system has come to dominate our world. We’ve handed total control of the money supply to a tiny banking elite.

These central bankers never once stand for election. And despite the tremendous power they wield, citizens still think that they live in a democratic republic. Very curious indeed.

Yet while this entire concept of paper currency is deeply, deeply flawed… there are some currencies which are more flawed than others.

When evaluating a paper currency, it’s imperative to first look at the financial condition of its issuing authority– in this case, the central bank.

The US Federal Reserve and European Central Bank, for example, are in worse condition than Lehman Brothers when that bank went bust in 2008. This makes the dollar and euro quite risky to hold.

But there are other currencies in even worse shape.  Let’s examine a few of them:

This one is a shocker for most people; Canada is often considered the darling of Western currencies because (so goes the conventional wisdom) the Canadian economy is strong and natural-resource based.

But if you look at the health of the central bank, Canada wins the award for LEAST capitalized central bank in the west, posting razor thin equity of just 0.53% of total assets.

Given that currency is nothing more than a liability of a central bank, the bank’s poor financial condition weighs heavily on the currency’s resilience.

Mexico’s central bank is actually insolvent.  And this is another shocker for those keen to invest in one of Latin America’s largest economies.

In fairness, this is not an enormous sum of money; however, the amount is growing. And there’s going to come a time when the government will be forced to bail out the central bank.

Yet Mexico’s government is already running a steep budget deficit. And the country’s public debt has been growing rapidly. So the trend clearly shows further deterioration in the fundamentals.

Talk about a train wreck. The Bank of Japan is already in a weak financial position, with net equity of just 1.9% of total assets.

But Japan’s government is forcing them into the most unprecedented monetary expansion in a central banking era where using the word ‘unprecedented’ has become commonplace.

46% of the Japanese government’s budget is financed by debt. Most of this is mopped up by the central bank.

Yet as the government’s debt level already exceeds 200% of GDP, the gross interest payments alone eat up more than 50% of tax revenue.

Japan has no hope of getting out of this alive. The only way out is default, or a currency crisis. Neither of these cases makes the Japanese yen an attractive option to hold.

As to the ‘healthy currencies’ out there? Norway’s krone is by far the safest currency from a technical perspective; its central bank is the best capitalized on the planet

(Premium members: please refer to your welcome kit for instructions on how to open a Norwegian bank account.)

The Hong Kong dollar also gets high marks, but for unique reasons. More on this in a future letter.