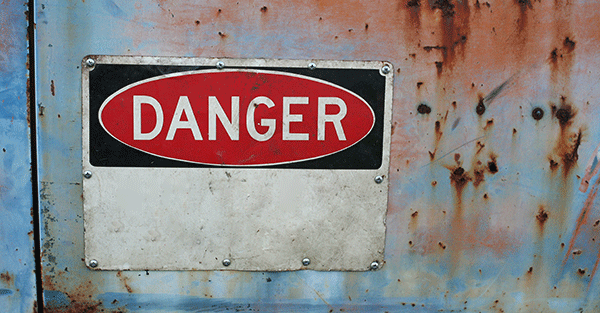 If you haven’t seen the 2015 Best Picture nominee, The Big Short, I strongly recommend it.

The Big Short is based on Michael Lewis’ book which examines how such an extraordinary financial crisis gripped the world in 2008, and the handful of people who saw it coming.

The movie opens asking a very simple question about the global financial meltdown:

So how is it that a handful of people were able to see it coming? How could they see what nobody else saw?

For anyone who actually looked, it was obvious that the banking and housing boom in the early 2000s was built on a house of cards. The data was all there.

Given the financial establishment’s astonishingly short-term memory and capacity to make even bigger mistakes than ever before, we now find ourselves in a very similar position today.

Once again, the financial system is in desperate condition. And the data is all there for anyone who cares to look.

Let’s look at a few of the numbers together.

Back in 2008, much of the calamity was caused by an implosion of “subprime loans” in the housing market.

These were frequently no-money down loans at teaser interest rates made to people with poor credit and limited income.

Banks made these toxic loans with your money.

The best example of this was probably Johnny Moon, a homeless man with no income or employment history who was able to borrow more than $600,000 to speculate in real estate.

The total value of these subprime loans was a whopping $1.3 trillion.

Not much has changed.

They’ve even managed to go beyond “no-money down”, and are actually paying governments to borrow money at negative interest rates.

Japan is a great example.

Even though Japan’s national debt exceeds 200% of GDP, and it takes over 25% of tax revenue just to pay interest on the debt, the Japanese government is able to borrow money for ten years at negative interest.

This means that investors are GUARANTEED to lose money. It’s worse than no money down. And it’s total madness.

The bigger issue is that the size of this bubble is an astounding $7 trillion, far bigger than the subprime bubble in 2008. And it grows larger by the day.

To expect that this will turn out any differently is foolish.

So at least they had some capacity to slash interest rates and fight the crisis using traditional policy tools.

Today, US government debt exceeds $19 trillion, well in excess of 100% of GDP.

They have to borrow money just to pay interest, and they have entire pension funds that are on the brink of bankruptcy.

The Federal Reserve’s balance sheet has exploded to $4.5 trillion, and interest rates are barely above zero.

The government has no means to bail anyone out, including itself. And the Fed has no capacity to print more money and expand its balance sheet without causing a major currency crisis.

Simply put, the bubble is just as insane as in 2008, but much bigger. And the financial establishment has no ammunition to fight it.

If you want a more detailed comparison of the 9 most ominous similarities between 2008 and 2016 click here to watch today’s video podcast. 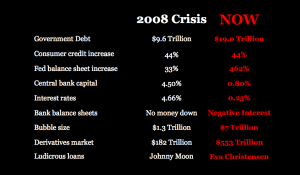 I’ll even tell you about the Danish sex therapist who was actually paid interest to borrow money.