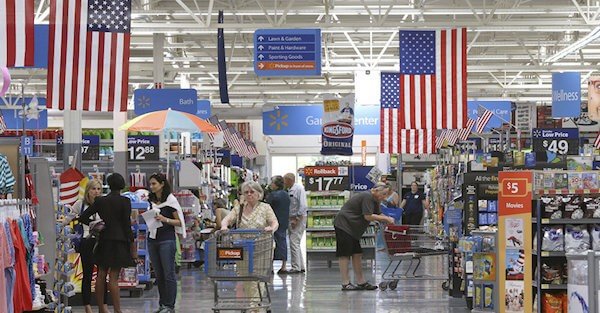 Last weekend while I was in Denver, I had the opportunity to speak with a young man from the Netherlands who was attending our charity event.

It was his first trip to the United States, and I’m always interested to hear people’s first impressions.

He told me he was really overwhelmed with the size and scale of everything. China is about the only other country in the world that does everything as big as the US.

He also told me he couldn’t get over how much stuff there is to buy in the US… and how easy it is.

He’s absolutely right. The US is an amazing place for a number of reasons; it’s modern, generally safe, and boasts a high standard of living.

And, yes, as a consumer, it’s one of the best places in the world.

(Though I would suggest that there are parts of Asia that are even better; Hong Kong, for example, has a similar selection of goods and services from all over the world, yet ZERO tax.)

You can buy just about anything you want in the US, and with so many retailers competing for your business, the service, ease, and efficiency of buying anything is nearly unparalleled.

The US economy is almost DESIGNED for consumption. And, while convenient, this is a pretty bad thing over the long term.

Real wealth is created, and sustained, through production. Not consumption.

This isn’t exactly rocket science– our ancient ancestors figured this out 10,000+ years ago during the agricultural revolution.

They learned that, in order to survive and prosper, they had to produce more food than they could consume.

I call this the Universal Law of Prosperity. And if our ancestors hadn’t followed this principle, none of our modern civilization would exist today. We’d still be cave men, hunting and gathering for survival.

But the Universal Law of Prosperity is no longer the law of the land in the US.

Any high school economics student knows that 70% of US GDP is comprised of consumer spending. The common refrain that ‘the US consumer drives the economy’ is absolutely true.

Early in its history, the United States was a producer economy. Americans made stuff. Exported it. Saved their money. And reinvested.

Most of the country’s wealth and economic dominance was established in those early years.

The US dollar had just become the global reserve currency under the new Bretton Woods system, and the US economy had become the world’s most dominant and powerful.

Americans began spending their newfound wealth, and soon the rest of the world grew to depend on the insatiable appetite of the US consumer.

Entire nations began basing their economic models on exporting to the US.

US consumption kept growing… at all levels. Individuals started spending far more than they earned.

The US savings rate plummeted, and even reached NEGATIVE territory for a number of years. Household debt ballooned as Americans borrowed money at record levels to buy more stuff.

The government did the same. The national debt exploded as bureaucrats squandered the public’s savings in almost legendary exploits, from that infamous $2 billion Obamacare website to the 6+ trillion in fake accounting at the Defense Department.

Ultimately it’s all consumption; the entire economic system is effectively milking the wealth and prosperity that was created in the past, like a trust fund baby that blows through his family’s fortune.

And while it’s really great to be a consumer in the US, it’s becoming more difficult to be a producer.

Case in point– according to a recent study by the Institute for Justice, about 1 in 4 workers in the US now requires some special government license. That’s up from 1 in 20 workers back in the 1950s.

Many of these are in low income, blue collar professions. And much of the time the requirements are totally irrational.

The average time required to qualify for a barber’s license, for example, is 415 days. For an interior designer, it’s an unbelievable 2,190 days.

These licenses don’t exactly make the world a better place; they’re mostly just bureaucratic obstacles that make it more difficult for lower-income workers to be productive.

We’re also seeing worrying trends with consumer debt, which is now at an all-time high.

This essentially means that Americans are borrowing from the future in order to buy stuff today, and doing so at record levels.

And the savings rate is once again plummeting, down to its lowest level in more than a decade.

On top of that, the US trade deficit continues to grow, all while the federal government massively outspends its income.

Oh, and the government is staring at yet another debt ceiling / government shutdown debacle in just 48-hours.

This time is not different. History is full of examples of formerly wealthy, prosperous nations which fell into terminal crisis because they favored a system built on debt and consumption, rather than savings and production.

I don’t want to suggest that this is an imminent crisis. It’s not.

But it is a troubling, high-impact, long-term trend. And it’s worth ensuring that you have a backup plan.

If all of your assets and all of your income depend exclusively on a heavily indebted nation with a bankrupt government continuing to persist forever without any consequences, you’re probably taking some unnecessary risks.

A good plan B involves simple, rational, legal, cost-effective (or often FREE) steps to ensure that you’ll always have a good option, no matter what happens (or doesn’t happen) next.