As Hong Kong refuses to bend the knee… 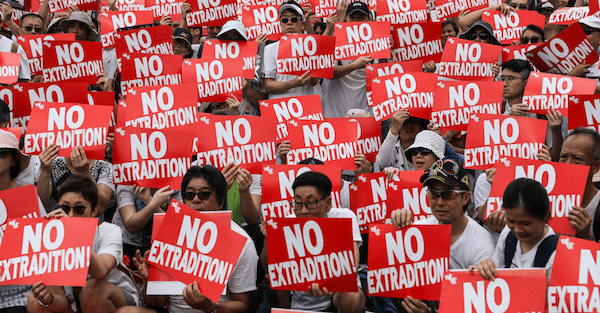 Sun Tzu, the legendary Chinese general of the 6th century BC Zhou Dynasty, famously wrote in the Art of War:

“When you engage in actual fighting, if victory is long in coming, then men’s weapons will grow dull and their ardor will be damped. If you lay siege to a town, you will exhaust your strength.”

If you’ve turned on a television, seen a newspaper, or casually browsed the Internet today, you probably saw some startling news about more protests erupting in Hong Kong.

I told you about this earlier in the week when I was on the ground there– over a million people took to the streets to demonstrate against a Draconian new law that the Hong Kong government is proposing which aims to make it easier to extradite political dissidents to mainland China.

People in Hong Kong are militant about their freedom, and they’re refusing to bend the knee over this proposed law.

Yet the government is still pressing ahead despite overwhelming opposition. So much for representative democracy.

Other governments around the world have spoken out about it, including even the United States, which issued a statement expressing “grave concern” about the law.

But… China understands its Sun Tzu very well. This is a siege. Foreign governments, media, and people in Hong Kong are all attacking against this proposed legislation.

However, the attackers will eventually exhaust their strength.

All of these foreign governments will go back to minding their own problems. The people in the streets will go home. The media will grow tired of reporting on the story and turn their attention to Donald Trump’s latest Twitter rant.

China just needs to be patient and wait for its enemies to exhaust their strength. And then, one day when everyone has been worn down by life’s distractions, they’ll pass the law.

Time is on their side. Protests and demonstrations only delay the inevitable.

There’s a second lesson that’s come out of these Hong Kong protests that I want to discuss today, and it’s about the police.

People are in the streets of Hong Kong to voice their disgust over this bill… and the police are right there with them, firing tear gas into the crowds.

We like to think that the cops’ sole purpose is to catch criminals and put them in jail.

But these images out of Hong Kong are a stark reminder that, even more important than catching criminals, their ultimate fealty is to the political class and ruling elite… to protect the government from the people, instead of the other way around.