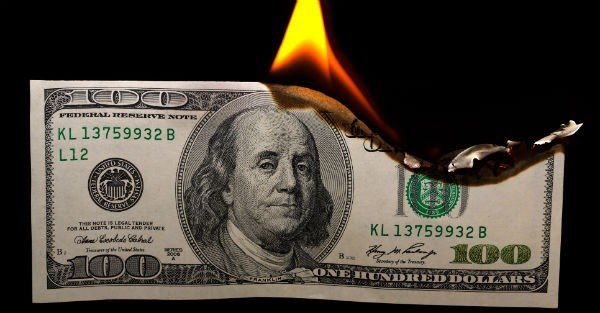 In July 1944, just weeks after the successful Allied invasion of Normandy, hundreds of delegates from around the world gathered in Bretton Woods, New Hampshire to determine the future of the global financial system.

The vision was simple: America would be the center of the universe, and every other nation would revolve around the US.

This arrangement ultimately led to the US dollar being the world’s dominant reserve currency which still remains today.

Whenever a Brazilian merchant pays a Korean supplier, that deal is negotiated and settled in US dollars.

Oil. Coffee. Steel. Aircraft. Countless commodities and products across the planet change hands in US dollars, so nearly every major commercial bank, central bank, multi-national corporation, and sovereign government must hold and be able to transact in US dollars.

This system provides a huge incentive for the rest of the world to hold trillions of dollars worth of US assets– typically deposits in the US banking system, or US government bonds.

It’s what makes US government debt the most popular “investment” in the world, why US government bonds are considered extremely liquid “cash equivalents”.

As long as this system continues, the US government can continue to go deeper into debt without suffering serious consequences.

Just imagine being totally broke… yet every time you want to borrow money there’s a crowd of delighted lenders eager to replenish your wallet with fresh funds.

This may be the US government’s #1 advantage right now.

You’d think that they would be eternally grateful and take care to never abuse this incredible privilege.

But no… not these guys.

In fact, they’ve done the exact opposite. Over the last eight years the US government has gone out of its way to eliminate as much of this benefit and alienate as many allies as possible.

They’ve abused the trust and confidence that the rest of the world placed in them by racking up record amounts of debt, waging indiscriminate wars in foreign lands, and dropping bombs on children’s hospitals by remote control.

They’ve created absurd amounts of regulations and had the audacity to expect foreign banks to comply.

Plus they’ve levied billions of dollars worth of fines against foreign banks who haven’t complied with their ridiculous regulations.

And they’ve threatened to banish any foreign banks from the US financial system who don’t pay their steep fines.

It’s as if Barack Obama pulled together the smartest guys he could find to make a list of all the ways the US government would have to screw up in order to lose its enormous financial privilege… and then he went out and did ALL of them.

The US government is practically begging the rest of the world to find an alternative to the US dollar and US banking system.

Even the government of France, a key US ally, called into question continued US dominance of the global financial system after the US government slammed French bank BNP Paribas with a $9 billion fine.

There have already been some attempts to displace the United States in the financial system.

China has been aggressively setting up its own competing financial infrastructure, something called the China International Payment System.

It’s been a slow start for the Chinese, but they’re building momentum. Though I’m not sure China is the answer in the long run.

While banks around the world may not care for the long and strong arm of the US government, the Chinese government doesn’t exactly inspire trust either.

But now there really is an alternative. Technology.

Ripple, a blockchain-style protocol that’s funded by Google Ventures (among others), is now being utilized by international banks to send and receive transactions directly.

Large foreign banks have what’s called a “correspondent account”, typically at a major US bank like JP Morgan, Citibank, etc.

Foreign banks’ US dollar correspondent accounts are typically at major Wall Street banks because that’s the epicenter of US dollar transactions.

Again, this gives the US government enormous power over foreign banks. Any foreign bank that doesn’t do what Uncle Sam commands can be excommunicated from the US banking system.

And without access to the US banking system, a foreign bank will be unable to transact in US dollars, and hence unable to conduct any global business.

This is a death sentence for a bank. The US government knows this and has been blackmailing global banks for years.

But now technology is providing another option.

Banks don’t have to use the US banking system anymore; they can send real-time payments internationally using the Ripple protocol.

This isn’t some wild theory or conjecture. It’s actually happening.

Just this morning a group of 15 banks in Japan signed up to start using Ripple, and dozens of banks plan to use the protocol within the next six months.

The technology is cheaper. Faster. Superior. And it doesn’t come with any US government strings attached.

So it seems Uncle Sam may have finally shot himself in the foot for the last time.