“Boots on the ground” report from Greece 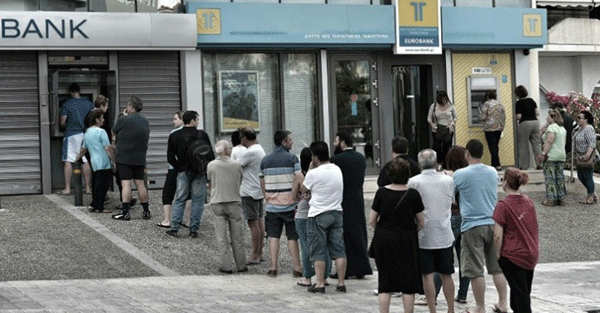 [Editor’s note: This letter was written by a Greek-American friend of Simon’s who is currently living near Athens.]

Since my arrival into the country late May, the topic of most discussions I overhear everywhere are naturally about the debt negotiations.

Tsipras supporters are generally fed-up with 5yrs of blood-letting “from the Germans”.

Critics, on the other hand, see the euro as some sort of abstract membership in a club that must be retained at all cost.

That’s especially true where I’ve been staying here in the port-city of Piraeus, which – being the country’s biggest port, is home to mostly blue collar, working class folks where unions more or less dominate.

To illustrate the political leanings around here, I hazily recall a headline in a newsfeed summing up their worldview quite accurately: “Piraeus – a neighborhood where Syriza is not quite left-wing enough.”

Like most locals, I’ve been steadily hitting the ATM for the past weeks to amass some emergency cash.

I ventured out today for the first time since the capital controls were installed yesterday to have a look around.

In Piraeus, I saw a queue of at least 30 people at a branch of Alpha Bank, and about 10 people at the Bank of Piraeus, where I waited.

The mood among the people waiting was pretty cool, friendly and even throwing a few funny comments around to address the obvious elephant in the room.

Older pensioners who were waiting, being used to getting their money from the window, had dusted off their debit card and received generous help from others on using it.

Experiences were shared on efforts to withdraw cash the previous day, where the published daily withdraw limit of 60 EUR/day for citizens was in effect (and confirmed by to me by the folks on line).

Today however, having presumably exhausted their supply of 20 euro notes, this ATM machine imposed upon users a de-facto daily withdraw limit of 50 Euros – since it was only dispensing 50 Euro notes.

As has also been reported, these capital controls do not apply to foreign bank accounts; and I can confirm to be true as my foreign bank card allowed me to withdraw my self-elected amount (of 300 EUR on this occasion) without issue.

There is certainly an unusual feeling of calm in the air. Car traffic resembles a quieter “Sunday” level than a typical summer weekday going into the high tourist season.

Citizens seem a bit more polite and helpful to one another than before, with no shortage of clever comments to break the tension on everyone’s mind being all in the same boat.

My first thought was to assume a newfound “keep calm and soldier on” state of unity among the populace.

But this is Greece, not Northern Europe. the words “quiet” and “calm” never share a sentence here.

No, this was something different, I believe, more of a “laugh to keep from crying” state of mind.

And being very experienced with Greece and Greek culture for my entire life, this realization was off-putting to say the least.

I’ll forward along any additional observations during my stay and leave you with one final, personal thought.

For all the talk and preaching of the risks one takes by placing all their “flags” into the blind faith and trust of one government in the abstract, it’s nothing like witnessing it firsthand.

Greece, right here – right now, is where that all “gets real.”

But more importantly, all the benefits of a multiple flags approach also “gets real” when you’re the guy who the crisis can’t touch.

I’m able to merely observe and participate without worry, sleeping tight knowing that all that what I’ve worked to achieve in his life is out of the reach of supranational, unelected & unaccountable EU autocrats.