Bruce Lee and the stock market 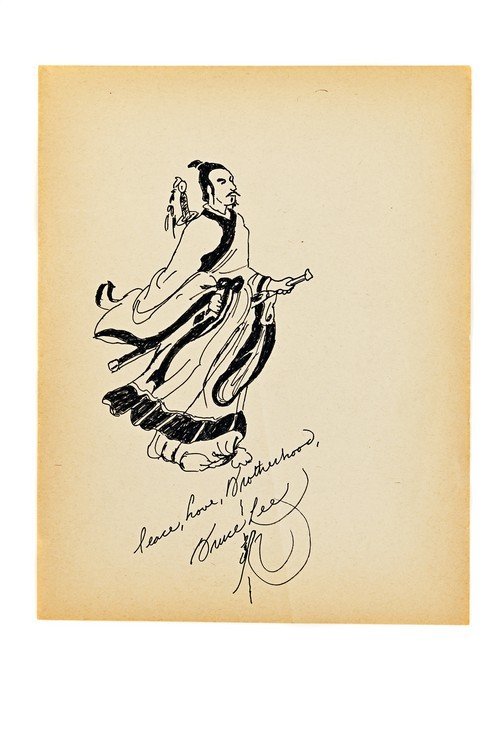 This morning I woke up bright and early to participate via the Internet in a live auction that was being held halfway across the world.

The Hong Kong branch of Spink & Son, a British firm originally founded in the mid-1600s, was putting a series of Bruce Lee memorabilia under the hammer.  And as a lifelong fan of Bruce Lee, I couldn’t miss it.

The items up for sale include a couple of pairs of Bruce’s own nunchaku, his eye-catching yellow jumpsuit from Game of Death (in which he fights Kareem Abdul-Jabbar), and some of Bruce’s hand drawings.

When the bidding for the first lot opened, the price immediately surpassed the auctioneer’s initial estimates. It was a frenzy. And before I knew it, the gavel fell and I had missed the boat.

I was determined to not let it happen again.

The second item was rolled out– one of Bruce’s sketches, drawn and signed right before his untimely death in 1973. When the bidding opened, I clicked furiously trying to keep up.

The trend was moving higher and higher. And as the crowd pushed the price up, my emotions kicked in.

Every time another bidder upped the price, I countered. It stopped being about Bruce Lee and started being about winning… beating the guy on the phone from Timbuktu, or the guy in the room who was swiping his index finger across his nose to bid.

It was all over in less than a minute. And when the gavel fell, I had won.

Now, I know that modern auctions are supposed to be a pure form of the free market– buyers from around the world meeting for the purpose ‘price discovery’, with the item eventually going to the highest bidder.

Further, economists and university finance often teach that such markets are ‘efficient’, meaning that prices always reflect the most relevant information and are hence an accurate reflection of an asset’s value.

But in reality, nothing could be further from the truth.

The auction was an emotional frenzy. It’s not an efficient market. It’s full of fear, euphoria, and aggression.

The stock market is the same way.

Even though just about every rational metric suggests that many global markets (especially the US) are absurdly overvalued, emotional investors keep bidding prices up.

As my colleague Tim Price explained last week, anytime in the last 130-years that the Cyclically Adjusted Price Earnings (CAPE) ratio for the US stock market has exceeded 24, the market has, without fail, entered a 20-year bear market.

Meanwhile, Ben Bernanke is spraying a fire hose of cash and dopamine over the crowd, ensuring that investors have enough euphoria and liquidity to keep the party going.

So, sure, it’s possible the CAPE ratio can go to 40 before it crashes. But both the fundamentals as well as historical precedent suggest that the market is overheated.

Bottom line, this is not a consequence-free environment. And investors who aren’t paying attention can get hurt. After all, the most successful investors in history haven’t been the guys who blindly followed the crowd.

As for me, I spent about $8,500 on the sketch, including the auctioneer’s fee. I was damn lucky. In spite of my emotional frenzy, this is an excellent price.

A recent Sotheby’s auction sold a piano used by Coldplay’s Chris Martin for a whopping $1.5 million. And just yesterday, a Norman Rockwell painting sold for $46 million.

So… trading a few thousand of Ben Bernanke’s Federal Reserve Notes for a hand-drawn, signed sketch by Bruce Lee seems like a fair deal.

It’ll certainly be a better store of value than the dollar. And probably a better investment than stocks.

This opens the door to a discussion on collectibles as investments… but more on that another time.