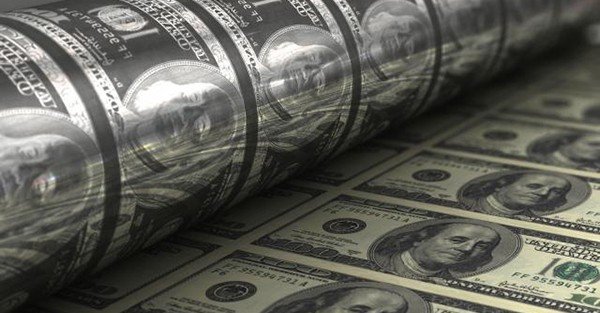 Fyodor Dostoyevsky’s seminal masterpiece Crime and Punishment is often thought of as one of the longest classics at more than 200,000 words.

The Consolidated Appropriations Act of 2016, which was signed into law on Friday, is nearly twice as long.

In case you’re not familiar with the background, the author was once quite wealthy.

But through years of reckless, irresponsible behavior, he gambled away his wealth until he was impoverished and unable to pay his creditors.

I am, of course, talking about BOTH Dostoevsky, and the United States government.

And you’d think that, with nearly $19 trillion in debt, they’d come up with a budget that demonstrates a modicum of conservation.

But no. At 887 pages, the bill allocates $1.15 trillion in war and discretionary spending for fiscal year 2016 which began almost three months ago.

(That’s an average of $1.3 billion in spending PER PAGE of the bill.)

Last December I recorded a podcast entitled “Paying down the debt is now almost mathematically impossible”, which described how the US as currently structured was condemned to perpetual deficits and rising debt.

This spending bill further proves that point. And in making it public law, President Obama has effectively signed the death warrant of the US government’s finances.

Late last week, the Congress jointly presented a series of bills to the President, the most important of which was the Consolidated Appropriations Act.

It contains a budget breakdown, department by department, for what the government is authorized to spend this fiscal year.

Bear in mind that this is only a portion of what the government spends.

Because on top of the $1.15 trillion ‘discretionary’ spending package, the government also spends a ton of money on ‘mandatory’ programs, like Social Security and Medicare.

Last year’s mandatory entitlements totaled $2.45 trillion. And given the thousands of people who become Social Security recipients every day, that number will increase this year.

Last but not least is that wee little problem of the national debt, now closing in on $19 trillion.

At more than $400 billion per year, interest on the debt is so huge that it has its own category of government spending.

Do the math and you’ll see that government spending for this fiscal year will hit $4 trillion for the first time in history.

They can’t change the amount of interest that America owes to its bondholders without causing a major financial crisis.

And they can’t make any adjustments to Social Security, Medicare, etc. without causing a major political crisis.

The only thing they realistically control is the discretionary category, which funds most of the things we think of as government– the military, national parks, homeland security, etc.

Again, you’d think that with such a massive debt, they’d be a bit conservative in their spending.

Yet their $1.15 trillion allocation to discretionary spending this fiscal year is a 6.6% increase from last year.

Personally I find this increase a bit curious given that the government itself tells us that there’s no inflation.

So even though the national debt is $19 trillion, and they haven’t run a budget surplus in decades, their ‘solution’ is to expand the government.

There is zero sense of urgency here.

Simultaneously, they passed a tax package that will cut government tax revenue by $622 billion.

(Don’t get excited– most of these tax cuts won’t affect your personal income tax at all.)

This sort of financial acumen should come as no surprise given that we’re talking about people who spent $2 billion of taxpayer money to develop a website.

Just like Dostoyevsky 150 years ago, the US government is broke and unable to pay its creditors thanks to a long-term trend of reckless, irresponsible behavior.

But rather than writing a masterpiece, they put together a bill that takes them even deeper into the hole, and crammed it full of so many provisions that it was impossible for anyone to have actually read it all.

One of those provisions buried deep in the bill is the Cybersecurity Information Sharing Act, which establishes ‘automated information sharing’ between major technology providers and the federal government.

So not only did they manage to make the government more broke, but they also managed to make you less free.

And that is perhaps the biggest twist of irony: just three days before signing this freedom-killing bill into law, President Obama proclaimed December 15th as “Bill of Rights Day”.

As the President wrote in his formal proclamation, the Bill of Rights was ratified on December 15, 1791 “to guarantee our fledgling Nation would never succumb to the tyranny it fought against. . .”

Try to read that sentence again without laughing. He continues:

“Today, we stand on the shoulders of those who dedicated their lives to upholding the meaning of our founding documents throughout changing times — a mission made possible by the fundamental liberties secured in the Bill of Rights.”

You can’t make this stuff up… ‘Standing on the shoulders’? More like trampling.

This is the two-faced reality you’re dealing with: hollow words about freedom published by an ever-expanding surveillance state, financed by a budget that drives the nation closer to fiscal destruction.

This is not a consequence-free environment. What’s your Plan B?