Fed president says US banks have “half the equity they need” 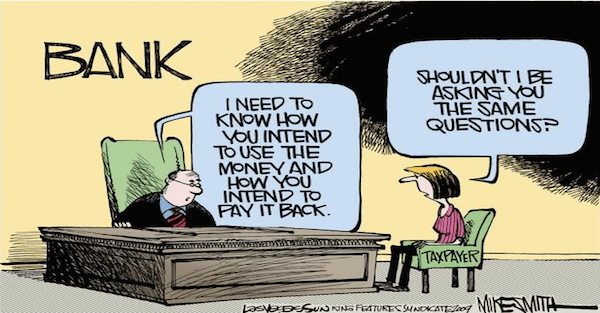 In a scathing editorial published in the Wall Street Journal today, the president of the Federal Reserve Bank of Minneapolis, Neel Kashkari, blasted US banks, saying that they still lacked sufficient capital to withstand a major crisis.

When you’re applying for a mortgage or business loan, sensible banks are supposed to demand a 20% down payment from their borrowers.

But when banks make investments and buy assets, they aren’t required to do the same thing.

Remember that when you deposit money at a bank, you’re essentially loaning them your savings.

As a bank depositor, you’re the lender. The bank is the borrower.

Banks pool together their deposits and make various loans and investments.

Some of their investment decisions make sense. Others are completely idiotic, as we saw in the 2008 financial meltdown.

But the larger point is that banks don’t use their own money to make these investments. They use other people’s money. Your money.

A bank’s investment portfolio is almost entirely funded with its customers’ savings. Very little of the bank’s own money is at risk.

You can see the stark contrast here.

If you as an individual want to borrow money to invest in something, you’re obliged to put down 20%, perhaps even much more depending on the asset.

Your down payment provides a substantial cushion for the bank; if you stop paying the loan, the value of the property could decline 20% before the bank loses any money.

But if a bank wants to make an investment, they typically don’t have to put down a single penny.

The bank’s lenders, i.e. its depositors, put up all the money for the investment.

If the investment does well, the bank keeps all the profits.

But if the investment does poorly, the bank hasn’t risked any of its own money.

The bank’s lenders (i.e. the depositors) are taking on all the risk.

This seems pretty one-sided, especially considering that in exchange for assuming all the risk of a bank’s investment decisions, you are rewarded with a miniscule interest rate that fails to keep up with inflation.

(After which the government taxes you on the interest that you receive.)

It hardly seems worth it.

Back in 2008-2009, the entire financial system was on the brink of collapse because banks had been making wild bets without having sufficient capital.

In other words, the banks hadn’t made a sufficient “down payment” on the toxic investments they had purchased.

All those assets and idiotic loans were made almost exclusively with their customers’ savings.

Lehman Brothers, a now-defunct investment bank, infamously had about 3% capital at the time of its collapse, meaning that Lehman used just 3% of its own money to buy toxic assets.

Eventually the values of those toxic assets collapsed.

And not only was the bank wiped out, but investors who had loaned the bank money took a giant loss.

This happened across the entire financial system because banks had made idiotic investment decisions and failed to maintain sufficient capital to absorb the losses.

(He also points out that banks today are obsessed with pointless documentation and seem “unable to exercise judgment or use common sense.”)

The banks themselves obviously don’t agree.

As Kashkari states, banks feel that they currently have TOO MUCH capital.

Bizarre. They’re basically saying that they want to be LESS safe, like a stunt pilot complaining that his helmet is too sturdy.

I’ve written about this many times– the decision for where to hold your savings matters. It’s important.

In addition to solvency and liquidity concerns, there are a multitude of other issues, like routine violations of the public trust, collusion to fix interest and exchange rates, manipulation of asset prices, and all-out fraud.

(I personally got so fed up with our deceitful financial system that I started my own bank in 2015 to handle my companies’ financial transactions. More on that another time…)

Yet despite these obvious risks, most people simply assume away the safety of their bank.

They’ll spend more time thinking about what to watch on Netflix than which bank is the most responsible custodian of their life’s savings.

There are countless ways to figure this out, but here’s a short-cut: much much “capital” or “equity” does the bank have as a percentage of its total assets?

Look at the bottom where it says “capital” or “equity”. That’s your numerator.

Then look above that number to find total assets. That’s your denominator.

Divide the two. The higher the percentage, the safer the bank.

Kashkari thinks the answer should be at least 20%, especially among mega-banks in the US.