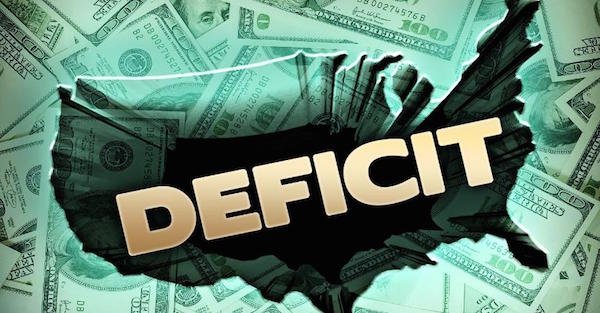 Yesterday the Office of Management and Budget released a new report called the “Mid-Session Review” of the US federal budget.

It’s something they’re required by law to do– periodically review and update the government’s budget and track the changes.

The last government budget update was released in February. And according to the February budget, the government’s deficit for this fiscal year was going to be a whopping $873 billion.

Now they’re projecting to close this fiscal year (which ends on September 30th) with a deficit of $890 billion… which means they’re over-budget by just under 2%.

2% is actually pretty good. But here’s the problem: when they first unveiled the FY2018 budget in March of last year, they projected the annual deficit to be ‘only’ $440 billion.

So between their initial projections in March 2017, and their current projections in July 2018, this year’s budget deficit increased by more than 100%.

Last March, they projected a total budget deficit of $526 billion for Fiscal Year 2019.

But according to the revised projections they published yesterday, the budget deficit for Fiscal Year 2019 will now be $1.085 TRILLION… 106% worse than projected.

Bear in mind that even though this revised budget is a colossal train wreck, the projections still don’t factor in the possibility of a recession. War. Major emergency. Natural disaster. Financial crisis.

These forecasts assume that all big picture and macroeconomic trends are going to be fantastic for the next decade.

We’ve lately been talking about the concept of assets being ‘priced to perfection’.

‘Priced to perfection’ is a financial term meaning that assets are valued as if business conditions will be perfect forever.

Investors simply assume that the business plan will be successfully achieved without any difficulty, that sales will be strong, consumers will be happy, the economy will remain robust, etc.

And as a result of these pie-in-the-sky assumptions, investors pay record high prices for assets.

Well, these budget projections are priced for perfection.

They don’t take into account the possibility of any number of major risks that are looming, not to mention the enormous capital investments that are necessary in the United States.

US infrastructure, for example, is in desperate need of serious multi-trillion dollar maintenance.

Then there’s that pesky issue of Social Security, which presently has a funding gap of tens of trillions of dollars, according to the government’s own financial statements.

If you factor in even a fraction of these costs, the budget numbers… which are already gruesome… fall off a cliff.

The government has no Plan B. In fact, their Plan A, literally, is to have trillion+ dollar deficits and expect that there won’t be any consequences.

There has never been a major superpower in the history of the world, from Ancient Rome to the French monarchy of Louis XIV, that has been able to run wild budget deficits without paying a serious toll… or passing those costs on to the people.

Sooner or later these bills have to be paid, whether that means higher taxes, dramatically reduced benefits, serious inflation, a loss of confidence in the currency, etc.

There are hundreds of ways this could play out, and it’s impossible to predict precisely how or when.

We only know for certain that there WILL be an impact.

It will likely take several years. But expecting to be able to run trillion dollar deficits and an insolvent pension fund without any consequences forever and ever until the end of time is totally absurd.

This is why, even though the government doesn’t have one, it makes all the sense in the world for -you- to have a Plan B.