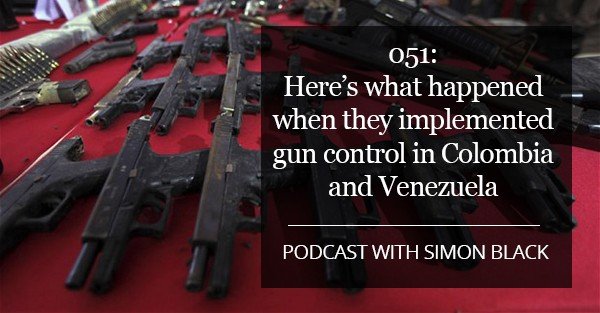 I just got back from Caracas, Venezuela, a city so dangerous that every time I left my hotel, the staff would warn me against even going outside.

It’s an incredibly difficult reality to reconcile. People hate the fact that they may get robbed or killed just steps from their front door when they leave the house every morning.

And nobody wants that.

After all, everyone wants to be safe. Even wild animals seek out safety in nature.

A few years ago, in response to national outcry, the government of Venezuela took steps to fix this problem.

There was too much death, too much crime. So they imposed strict gun control laws to stop the murderers and thieves.

The end result? Violent crime actually increased. And Caracas is now one of the most dangerous cities in the world.

But across the Andes is another city that used to be one of the most dangerous in the world– Bogota.

Years ago, Bogota led the region in murder. And they imposed their own strict gun control laws trying to clean up the streets.

But how could the same policy engineer completely different results in two cities?

This disparity becomes even more vexing when we look at other countries.

Honduras and Brazil both have very high homicide rates. Yet Brazil has highly restrictive gun laws, while Honduras has fairly lax gun laws.

Pakistan has some of the loosest gun laws in the world. Chile’s are fairly restrictive. Yet both have low homicide rates.

Bosnia has a very liberal gun laws. Belgium has very restrictive laws. Yet their homicide rates are similar.

Luxembourg has few privately-owned guns per capita, yet its murder rate is much higher than Germany’s, which has over twice as many.

Hawaii and Vermont have polar opposite gun laws yet nearly the same homicide rate.

The numbers are all over the board.

Those who oppose gun control tend to think that more guns and fewer regulations make us safer.

But the data doesn’t support either assertion, meaning there must be other factors at work.

(By the way, the National Academy of Science and the Center for Disease Control and Prevention came up with the exact same conclusion– the numbers don’t support either assertion.)

But it’s impossible to even begin to analyze until we admit what the real concern is. After all, we’re not really talking about gun violence.

Gun violence has been occurring for years, predominantly in poor neighborhoods across the country. 75% of gun-related violence takes place in just 5% of US zip codes.

But no one really cares about that.

As long as gun violence stays localized to black people, Mexicans, and other ethnic minorities in poor neighborhoods, it’s considered ‘crime’ and never makes the news.

It’s not until some lunatic shoots up a predominantly white, middle class neighborhood that CNN covers it, and Hollywood celebrities air public service announcements telling us that ‘we’ have to do something.

That response is an emotional one. Let’s get rational.

These incidents are undoubtedly tragedies. But if the goal really is to save lives, and you start with a flawed premise that it is the government’s responsibility to protect people, consider that every piece of legislation incurs a rather significant cost.

There’s the cost of lobbying… campaigning… plus the actual costs incurred in implementing and enforcing a gun control program.

How much is that? Billions? Tens of billions? Hundreds of billions? I mean, we’re talking about politicians who spent $2 billion on the Obamacare website.

Based on its own financial statements, the US government is in the hole by more than $60 TRILLION, and they run a half-trillion dollar budget deficit each year.

These guys are broke, which means they have to choose wisely.

So again, if the goal is to save lives (and if you really believe this is the government’s responsibility), the cold, hard truth is that you have to make rational decisions to get the highest return on investment, i.e. the most lives saved per dollar spent.

The President of the United States proudly told the nation last week that his government had spent $1 trillion protecting Americans against terrorists.

That’s a pretty amazing figure given how low the odds are of dying in a terror attack.

Hell, it’s more likely that you’d be shot by a police officer, or get killed in a US drone strike while visiting a hospital in Pakistan.

(By any independent count, Mr. Obama has killed more innocent civilians than all the crazed lunatics put together. Perhaps he needs to control some of his own guns.)

The government’s own numbers tell us that 3.8 people per 100,000 in the US die each year from non-suicide gun violence. Terror-related deaths are effectively 0.0.

If you’re going to spend scarce resources (time, energy, and money that you don’t have) to save lives, doesn’t it make sense to tackle a bigger problem that’s easier to solve, and where the solution is actually supported by the data?

Let’s talk about this more in today’s podcast. And it’s not what you think.

I’m not going to make an argument that more guns make us safer, or that ‘guns don’t kill people, people kill people…’ or anything like that.

Regardless of how you feel about the issue, I really encourage you to spend some time listening to this.