Here’s what happens when a currency completely breaks down 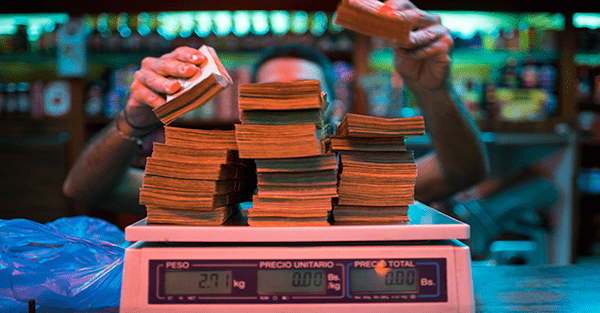 In Venezuela, hyperinflation has become so pitiful that shopkeepers are no longer bothering to actually count money.

Instead, they’re weighing it…

… as in literally pulling out a scale and weighing giant stacks of money. Do you want to buy a bottle of Coca Cola? That’ll be 1 kilo of currency please.

One shopkeeper interviewed by the Guardian newspaper said he’s piling up bricks of cash so quickly he feels like Pablo Escobar.

And yet Venezuela’s hyperinflation continues growing worse; those bricks of cash are buying less every week.

This is an important lesson.

Throughout history, human beings have used countless forms of money.

Many of the ancients used commodities like silver or salt. The feudal Japanese used rice. The island natives of Yap used enormous stone wheels.

Today we use physical pieces of paper and electronic digits in a bank account. Large financial institutions and governments use bonds.

Each of these is (or was) a form of money.

But regardless of the form, money is only credible as long as everyone agrees that it has value, i.e. there’s a large enough market size of people willing to use it.

This fundamentally comes down to trust and confidence.

But Venezuela’s example shows how quickly that very thin veneer of trust and confidence can shatter, plunging a country into chaotic hyperinflation.

We’ve discussed many times before that cash, specifically physical currency, is a good asset to own.

Physical cash eliminates a LOT of counterparty risk. There’s no more middleman banker standing in between you and your savings.

This has a lot of benefit.

If it turns out that your bank has been making idiotic bets with its customer’s deposits and runs into serious financial problems, you’ll have at least a portion of your savings in physical cash, so you’ll be unaffected by their stupidity.

If you live, in the words of that great American hero Homer Simpson, in the Sue-S-A, your bank account can easily be frozen or levied in a lawsuit.

So holding some physical cash ensures that you still have a way to put food on the table for your family.

There are so many reasons to keep some savings in cash.

But it’s important to remember as well that cash has limitations.

Modern money is nothing more than a mirage conjured out of thin air by central bankers– unelected bureaucrats who are awarded free reign over the monetary system.

Central bankers decide in their sole discretion whether or not to print money, destroy money, raise rates, lower rates… whatever they feel like doing.

Each of their actions yields consequences… and those consequences have winners and losers.

Mark Carney, head of the Bank of England, recently announced that he is willing to tolerate higher inflation and a weaker pound in order to benefit factory workers and British exporters.

So basically if you’re a factory worker or exporter, you win. If you’re a retiree on a fixed income, you lose.

In a ‘free society’, citizens are supposed to be able to vote on the leaders who make such important decisions, i.e. robbing one person’s standard of living to benefit another’s.

But that’s not how our modern financial system works.

Elected politicians don’t really hold the power. It’s unelected central banks who wield totalitarian control over the lives and livelihoods of other people.

It’s as if they’re presiding over some sort of financial death panel, determining who thrives and who gets crushed.

And I’m convinced that at some point in the future, our descendents will study this period of history with utter astonishment at how we could have allowed ourselves to be dominated by such a bizarre system.

Think about it– we even award our society’s most esteemed prize for intellectual achievement to economists who want to conjure even MORE money out of thin air, even when obvious examples like Venezuela persist.

So here’s the bottom line– definitely hold some cash, as in physical currency. Keep some in your safe.

Cash remains a great short-term hedge against problems in the banking system, and provides a number of other advantages including some minor asset protection benefit.

But think about keeping at least a portion of your savings outside of this bizarre system altogether.

Consider owning REAL assets, which could be anything from a private business to productive real estate to gold and silver.

And later this week we’ll talk about some of the most valuable real assets to hold.