How safe are top US banks? 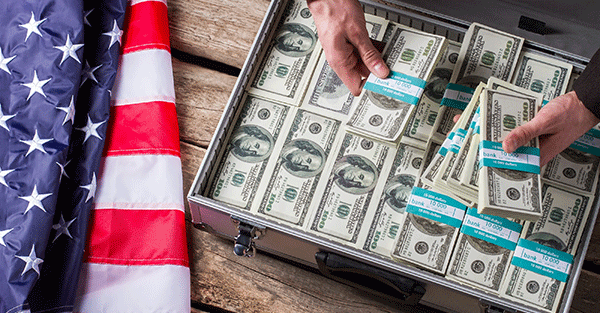 Recently I was having drinks with a friend of mine who is an ultra-successful US real estate developer and investor.

He told me that his team had just closed a large real estate transaction worth hundreds of millions of dollars, and they got a sweetheart deal from the bank.

The bank is loaning them almost all of the money at an interest rate of around 2%.

But it gets better.

If the Federal Reserve raises interest rates, he has the option of locking in the rate that he has now… so his interest rate will basically never go up.

But if the Federal Reserve lowers interest rates, the rate that he pays on the loan will go down.

In other words, he got an amazing deal from the bank… and it might even get better. But it will never get worse.

Now, this is obviously fantastic for the borrower.

But for the bank, this is an absolute sucker’s bet. There’s almost zero upside.

The bank is putting up the vast majority of the money, their return on investment is next to nothing, and the tiny return they are getting might even go down.

More importantly, if interest rates go up, or if inflation increases, the bank is going to lose a LOT of money.

Of course, the bank isn’t going to lose its own money. Banks never use their own money when they make these crazy loans.

No. Instead, they use their depositors’ money. YOUR money.

So while this is clearly a great bank if you are borrowing money, it would be crazy to be a depositor at this bank. That’s YOUR capital at risk.

This insanity is pervasive across most western banking systems.

They take in depositor funds, keep VERY little of it in reserve, and then go make the most asinine financial speculations with their customers’ savings.

So when banks make stupid bets, it’s ultimately the depositors who bear the risk.

And in exchange for that risk, you are paid a rate of practically 0%. It makes absolutely no sense.

Now, banks are supposed to have ‘Resolution Plans’ to ensure that their risky bets won’t put depositors at risk.

But just last month the Federal Reserve and Federal Deposit Insurance Corporation issued a scathing report criticizing the resolution plans of many major US banks.

Among the usual suspects were banks like JP Morgan, Bank of America, and Wells Fargo, all of whom had resolution plans deemed to be “not credible”.

On top of all of these risks, banks still maintain woefully substandard balance sheets.

Liquidity is a major problem at US banks, which typically hold the tiniest percentage of customer deposits (often as little as 1% to 3%) in cash equivalents.

The rest of your hard-earned savings (97%+) is gambled away on crazy loans and other investment fads.

Look, it doesn’t take a rocket scientist to see that this banking system clearly has a lot of risk.

And even eight years after the last crisis, major banks still don’t have credible plans to deal with the consequences when their risky bets don’t work out.

(Note- this is just the FINANCIAL risk. We haven’t even begun to talk about the legal risk, i.e. how easy it is to have your savings account seized or frozen.)

If you look at the data objectively, it’s obvious that it makes no sense to keep 100% of your savings locked up in this system.

As we’ve discussed before, holding physical cash is one option. You can dramatically reduce your bank counterparty risk by cutting out the financial middleman.

Another excellent option to consider is establishing a bank account offshore in a stronger, more credible, debt-free foreign jurisdiction.

Look at Hong Kong as an example.

As a jurisdiction, the government of Hong Kong has ZERO net debt, and the central bank is easily one of the most well-capitalized on the planet.

The average bank in Hong Kong maintains plentiful liquidity at 18.3% of customer deposits (which is 3 to 6 times higher than most US banks).

Capital reserves at Hong Kong banks are also strong, averaging 13.5% of the banks’ total balance sheets (this is twice as conservative as most US banks).

In the US banking system, the government is bankrupt, the central bank is insolvent, the deposit insurance fund is undercapitalized, the banks are illiquid, and they’re making high-risk loans that put customers and taxpayers on the hook.

In Hong Kong, the government has no net debt, the central bank is extraordinarily well capitalized, the insurance fund is solvent, and the banks are highly liquid and with plentiful capital reserves.

If you look at the data objectively, it’s obvious which of these two jurisdictions is the safer place to hold at least a portion of your savings.

(That said, the world is a big place, and there are plenty of examples aside from Hong Kong.)

Contrary to the media propaganda, having a foreign bank account isn’t about dodging taxes or anything shady.

Rather, it can be a rational, common sense, no-brainer solution to address the serious risks in your home country’s banking system.