How to stay optimistic even as terrorists “threaten our existence” 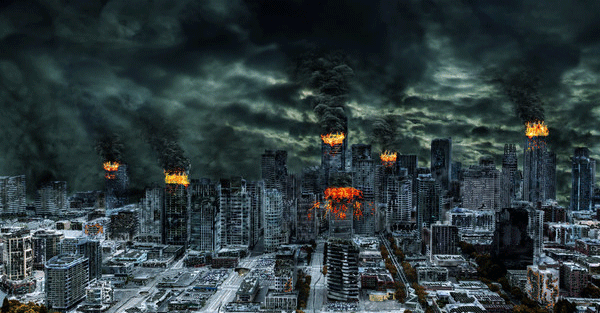 Citing multiple terrorist attacks, cybercrime, and a host of other threats, the report states that Germans should prepare for an event that could “threaten our existence.”

The report proposes a number of mandatory countermeasures, including that Germans should stockpile food and water.

There’s also peculiar language about “civil support for the armed forces” suggesting a possible return to mandatory military service, in addition to potential plans for emergency nationalization of food production and distribution.

We’ve received numerous emails from friends and readers in Germany asking if it’s time to “get out”.

Let’s be honest– most of the West is in the same boat right now.

Despite hundreds of billions spent on homeland security, aerial surveillance, police militarization, and spying on absolutely everyone…

… western governments are absolutely powerless to stop radicalized militants who are willing to blow themselves up.

France, for example, has military troops deployed throughout the country patrolling the streets and airports as if they were in downtown Kandahar.

Yet despite so much security, some lunatic was still able to get behind the wheel of a delivery truck last month and mow down 80+ people like bowling pins.

Plus Europe has additionally been suffering a full-blown refugee crisis that has turned into an international rape crisis.

I know a lot of people are panicking right now and feel like they need to hit the eject button.

But just remember that emotional, fear-based decisions tend to be very bad ones.

Look at the facts and make a rational decision.

In my own case, I “got out” long ago. I’ve been an expat for over a decade, something that turned out to be one of the best choices I’ve ever made.

For the past several years I’ve been spending about half of my year here in Chile (and the other half traveling to dozens of countries, now totaling more than 120.)

Weather in Chile is spectacular, the cost of living (especially if you want to live extremely well) is shockingly cheap.

And on a slice of paradise in Chile’s warm, perennially sunny central region, I’m able to grow all of my own organic food.

We grow rice and wheat (which we turn into organic flour). We press our own olive oil. We have our own wine.

Plus there’s abundant renewable energy and an endless supply of water from underground aquifers.

This is all available in Chile at a tiny fraction of what you might expect it would cost.

My team was recently contacted by a producer at BBC requesting an interview for a piece they’re doing about people “living off the land.”

I thought it was entirely the wrong idea, and not really what I do.

Sure, I live in a beautiful place with abundant food, water, energy, etc.

But just because I grow my own organic food doesn’t mean I’m sitting in a bunker waiting for the end of the world to come.

On the contrary. Despite all these threats and risks in the world, I remain incredibly optimistic.

And maybe part of the reason for my optimism is that I’ve removed myself from the majority of those risks.

Of course Chile has its own problems.

No one hijacks an airplane and threatens to kill all the Chileans.

* Immigration here for talented foreigners is remarkably easy; in another two years, in fact, I’ll be able to apply for citizenship and obtain yet another passport.

There’s also an abundance of opportunity in this country.

Just over two years ago, for example, I launched one of the largest agricultural ventures of its kind in the world, right here in Chile.

Our company has invested tens of millions of dollars in the country across thousands of acres of farmland, and we are now one of the largest employers in the region.

I’m sad to say there’s no way we would have been able to pull off this project in the US now given the absurd level of regulation and inflated land costs there.

But in Chile it’s possible; land and labor costs are so low that you can generate tremendous long-term returns with well-managed agricultural property.

(We’re not the only ones to figure this out– the Mormon Church and Harvard Endowment Fund are among the other foreigners investing in Chilean agriculture.)

I don’t mean to digress; the larger point here is that, yes, there are a LOT of issues to be concerned about in the West.

But the decision to leave shouldn’t be driven by fear. Make it about lifestyle and opportunity.

Chile is just one tiny corner of the world. There are boundless other possibilities. Your own slice of paradise may be out there somewhere.

After all, it’s 2016, not 1816. The technology exists for you to be able to work and generate income no matter where you are in the world.

There’s no reason to be beholden to something as anachronistic as geography anymore.

And if you do decide to stay put, at least consider a Plan B.

Where would you go if you ever did have to hit the eject button?

Don’t wait until you’re packing your bags to start thinking about it.