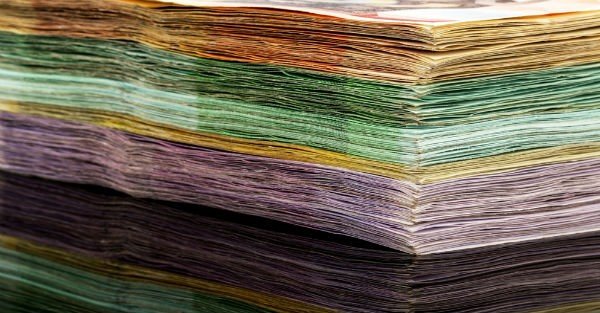 Prof. Ken Rogoff’s book ‘This Time is Different: Eight Centuries of Financial Folly; is one of the best researched public works on the subject of sovereign debt.

And Rogoff’s conclusions (though hotly contested due to an ‘Excel error’) were that, sensibly, governments which accumulate too much debt get into serious trouble.

Duh. Not exactly a radical idea.

But in an article published yesterday afternoon on the Financial Times website (based on a recently published academic paper), Rogoff did propose a new idea that is radical: ban cash. All of it.

Rogoff begins asking the question: “Has the time come to consider phasing out anonymous paper currency, starting with large-denomination notes?”

He goes on to explain that getting rid of paper currency would provide two critical benefits:

1) It would reduce crime and tax evasion;

2) It would allow central banks to drop interest rates BELOW ZERO.

I was stunned. Though given the status quo thinking we have to put up with today, I really shouldn’t have been.

In fairness, Mr. Rogoff is an academic. It’s his job to dispassionately analyze data and render conclusions, whatever they may be. What’s scary is that some dim-witted politician will likely jump all over this.

People have been deluded into believing that only criminals and tax cheats hold cash in large denominations. And the conclusion is that if we ban cash, criminals will simply quit their craft because they’ll no longer have an officially-sanctioned medium of exchange.

Drug deals can just as easily go down swapping share certificate of Apple. Or title to a new car. Any number of things.

Perhaps the more important point, however, is the notion that eliminating cash frees up central bankers to force interest rates into negative territory.

The contention is that the official data tells us that inflation is tame. Consequently, central banks should be free to expand the money supply and ratchet down interest rates even more.

Technically a central banker could drop interest rates to below zero.

But if they did that, who in his/her right mind would hold their savings at a bank where they would have to PAY THE BANK to make wild bets with their money?

People would just go to physical cash instead.

Solution? Eliminate cash! Then people would be forced to suffer NEGATIVE interest rates… and thus have a HUGE INCENTIVE to spend as much as they can as quickly as they can. Forget about putting something aside for a rainy day.

But hey, at least the stock market would probably rise.

Now, I highly doubt that physical cash is going to be sucked out of the system… tomorrow. But the War on Cash is very real indeed.

As I travel around the world, I’ve seen with my own eyes– CASH has become the #1 hot button item for customs agents everywhere. They even have highly trained cash sniffing dogs now.

It’s becoming more and more obvious that people should divorce themselves from this system and consider holding at least a portion of their savings in something other than fiat currency.

And of all the options out there, it’s hard to beat the convenience and tradition of precious metals.

Even if you’re looking to move large sums of money, it’s possible to buy a rare coin and walk out of the country with a single nickel worth $50,000 in your pocket. More on that another time.