Is it Friday? It must be time for another major political scandal 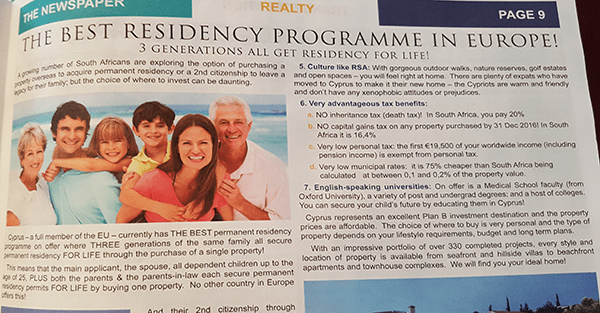 There’s a long-standing joke in international finance that goes “Brazil is the country with the most potential… and always will be.”

The idea is that a Brazil, with all of its immense resources and capacity, will never come close to realizing its potential because of how screwed up everything is.

The same joke easily applies here in South Africa, and across most of this continent.

I’m sitting here in the airport lounge about to fly off to Asia and have been reading the local news about the latest political scandal.

Political scandal in South Africa is about as commonplace as US media outrage against some Donald Trump buffoonery, or a leak showing yet another series of deceit and misconduct from the Clinton political dynasty.

Africa is just rampant with corruption. Is it Friday? It must be time for another major political scandal.

The latest one happens to involve South Africa’s President (Jake the Snake Zuma) who has been caught red-handed letting his buddies dip into taxpayer funds.

I’ll spare you the sordid details. The interesting thing I wanted to point out is what else I saw.

As I was flipping through the articles in several local magazines and newspapers, I came across multiple advertisements for foreign residency and second citizenships.

There was one advertorial about Cyprus, featuring a well-to-do, happy family on the beach with the headline “The Best Residency Programme in Europe”.

The article went on to explain how you can buy real estate in Cyprus and receive residency for life, not only for yourself, but for your extended family, including spouse, children up to age 25, parents, and parents-in-law.

It also explained the tax benefits, comparing the 0% inheritance tax in Cyprus against the 20% rate in South Africa, plus capital gains and income tax benefits.

(The ad was more or less accurate– Cyprus does have an attractive residency option, as well as an incredibly expensive ‘citizenship by investment’ program, that is really just a multi-million euro government donation in disguise.)

There was another one featuring an attractive woman holding a passport entitled “Dual Citizenship: The insurance policy of the 21st century.”

They’re right. Having a second passport is a fantastic insurance policy.

A second passport means that, no matter what happens, you always have another place where you can go to live, work, invest, and bring your family.

It provides more options for travel, for business, and for living… and more options means more freedom and security.

Even if nothing bad ever happens, it’s possible that your children, grandchildren, and future generations can receive these benefits.

But what I found so interesting is how many of these ads there were across local papers and magazines.

You don’t see many advertorials in North America and Europe talking about second passport and residency options, especially in mainstream publications.

But here it’s quite common.

That’s because in Africa they’ve already learned the lessons.

They have an inherent mistrust of government.

They know what happens when you put all your faith in the system, and they’ve lived through the consequences– civil asset forfeiture, capital controls, hyperinflation, civil unrest.

They don’t need any more convincing. They just need to know the options.

The national debt in most western nations, from the US to Italy to Japan, is far higher than the typical African nation.

Negative interest rates and withdrawal controls already exist in many parts of Europe, and there’s been an alarming rise in Civil Asset Forfeiture in the Land of the Free.

There are so many polls, for example, showing that Americans’ trust in government and major institutions is at historic lows.

But I find it fascinating that, even though most Westerners seem to acknowledge the risks and trends, they choose to willfully ignore them.

People recognize the problem… but that’s where the thinking stops. There’s a major disconnect between problem and solution.

That’s probably because most citizens have been brainwashed for their entire lives that the way you solve these problems is by casting a vote.

The reality is that this never works. Every election is always about change, yet every single time you just get more of the same… and usually worse.

All that hope and change from Barack Obama ended up being an extra $10 trillion in debt, 500,000+ pages of new rules and regulations, many more years of war, and more dismantling of your personal freedom.

Rather than rely on an institution that an overwhelming majority of people doesn’t trust, your best bet is to rely on yourself.

Just like people on this continent intuitively understand, giving yourself another option, i.e. having a Plan B, can substantially mitigate these risks.

The beauty is that there’s usually no downside.

As I often write, it’s hard to imagine that you’ll be worse off for having access to another place where you and your family can safely go live, work, invest, and do business.

It’s hard to imagine that you’ll be worse off for having some sacrosanct rainy day funds that are well-protected against frivolous creditors or wrongful forfeiture.

It’s hard to imagine that you’ll be worse off for taking completely legal steps to reduce the amount of taxes that you owe, all of which go to funding the very machine that’s destroying your country.

It’s hard to imagine that you’ll be worse off for holding some savings in a pristinely capitalized bank… or even some physical cash and precious metals.

Even if nothing bad ever happens, you still derive benefit.

But if the worst comes, this prudent, logical planning will ensure you never become a victim of someone else’s corruption or stupidity.