Is this what prosperity is supposed to look like?

As I’ve been traveling across Asia recently, one recurring theme I’ve been seeing are these constant headlines that ‘inflation is under control.’

Across the region, and in fact across the world, the official statistics tell us that inflation is moderate, so it’s OK to continue printing more money.

Aside from being one of the biggest scams in modern finance, there are some serious flaws with this line of thinking–

This may work fine and dandy in the developed world where people often spend less than 10% of their household income on food.

But in poor countries… where the other 90% of human beings live… people can easily spend upwards of 50% on food and fuel.

That central bankers willfully eliminate these important factors from their analysis effectively ignores 90% of the world’s population. It’s disturbingly out of touch.

Being on the ground in some of Asia’s poorest countries, it’s clear that inflation has not moderated… and that tens of millions of people’s lives have been turned upside down because the price of onions and turnips and chickens has gone through the roof.

This has very much been the case here in Bangladesh, where the surging prices of legumes, rice, and flour has hammered the 160+ million population.

Disingenuously, they say that “non-food inflation moderated to 7.12 in February from 7.79,” and use this as justification to keep printing. But the drop in iPad prices is no comfort to the guy who can’t afford to buy chickpeas for his family in Dhaka. 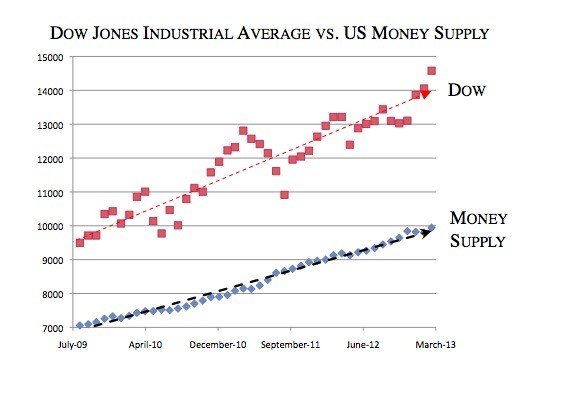 It’s not just stocks, either. Many of the world’s bond markets are also at, or near, their all-time highs. Even junk bond yields are hovering at 5%. It’s absurd. Not to mention other asset classes… such as US farmland, beef prices, etc.

Doesn’t it seem a bit strange that so many investments across the world can simultaneously be at their all-time highs? And are we really to believe (with a giant bull tearing through the cover of the Economist magazine) that this is a consequence-free environment?

Even US residential real estate is posting sensational price increases… much to the pleasure of mainstream financial media. One can almost hear the uncorking of the champagne bottles.

It’s important to point out amid all this euphoria, though, that nearly every known instance of hyperinflation started with a rise in asset prices. And in this case, frighteningly enough, we’re seeing a rise in almost ALL asset prices.

This was famously the case in post-Revolutionary France in the1790s. People actually cheered the idea of creating more fiat money because the values of their properties and assets kept rising.

And all the while, politicians pushed to print even more, threatening that if they didn’t, the country would plunge into deflation! Sounds familiar?

Bankrupt governments almost invariably resort to the same desperate tactics– like polluting the currency into hyperinflation, selling it to the people as ‘for their own good’, and criminalizing any alternative (like we just saw today with Bitcoin).

Some of the most dangerous words on earth are “this time is different.” It’s not. This time is never different.