It finally happened: 500 euro notes will no longer be produced 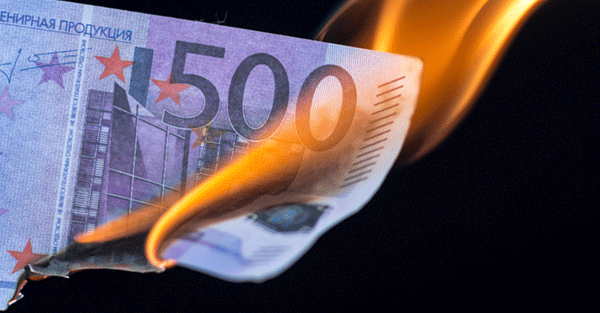 After months of innuendo, the European Central Bank (ECB) announced last night once and for all that they will no longer produce the 500 euro note.

The 500 euro note is the highest denomination of physical currency in the euro zone, and they’ve been talking about phasing it out for quite some time.

Of course, according to their reasoning, only bad people who engage in criminal activity, tax evasion, and terror financing use 500 euro notes.

All of us law-abiding little people have no need for such high denomination cash.

That’s a very convenient view for the ECB to take given that they’ve led the crusade to make interest rates negative.

In other words, commercial banks are charged interest on the reserves they hold with the ECB.

This is an absolutely insane practice.

As a depositor, you WANT your bank to hold plenty of reserves with the central bank instead of gambling away your deposits on risky loans and investments.

But now if any bank in the Eurozone does choose to act conservatively, they have to pay penalty interest to the ECB.

Many banks in Europe are starting to pass on these negative interest rates to their customers, and it’s beginning to cause a breakdown in the financial system.

Think about it– who would willingly PAY for the privilege of depositing their funds in an extremely illiquid and potentially insolvent bank?

Rational people are already sensing the absurdity of this conundrum, and the solution is simple: hold physical cash.

We’ve talked about this before– there are entire banks and insurance funds that are choosing to hold portions of their reserves in physical cash.

And with 500 euro notes, they can store a LOT of savings in a compact space.

Even in a small safety deposit box, you could hold over 1.8 million euros worth of 500 euro notes. This is more than enough for most people.

But the ECB doesn’t want this.

The corrupt ruse of our modern banking system depends entirely on the public continuing to use it.

There simply isn’t enough physical cash in the banking system to support withdrawals of more than a few percent of total deposits.

So if more than a small percentage of depositors wanted cash, the banking system would be in trouble.

More importantly, the vast majority of bank deposits are held in various bond and loan portfolios.

So in the event of a significant uptick in cash withdrawals, banks would have to start dumping assets in order to free up the necessary funds for their customers.

And if multiple banks had to simultaneously dump assets to raise cash, that would cause a steep decline in the market prices of those assets.

Banks would suffer huge losses as a result. Many would go under.

Needless to say the financial establishment has every incentive to ensure this doesn’t happen.

Their solution? Start phasing the large denominations of cash that pose a threat to their system.

And the ECB started formalizing this with last night’s announcement.

The next step for them would be to quietly take these bills out of circulation until one day there’s simply no more of them available.

All of this is tantamount to capital controls– a way for central banks to trap your savings inside a worthless financial system.

As we’ve talked about before, holding physical cash is a great tool in a Plan B to reduce your exposure to problems in the banking system.

If you hold cash and there’s another 2008-style panic, you’re going to be OK.

This is a smart solution no matter WHERE you are in the world– Europe, the US, etc.

Even here in Chile where the banks are well capitalized, I routinely stop by the ATM machine on my way to the office in the morning to withdraw physical cash.

But as I’ve written in the past, cash alone is no panacea. And this move by the ECB shows that cash does have limitations.

Real assets, and in particular gold and silver, are also important elements of a Plan B.

Don’t think about gold as an investment. Think about it as a form of money– one that doesn’t depend on a central bank, or even a solvent banking system to have value.

In many respects it’s an insurance policy. And with the risks this obvious and writing very clearly on the wall, it makes sense to have some for yourself.