Market hits new highs on back of Fed announcement, forgetting the Fed is clueless 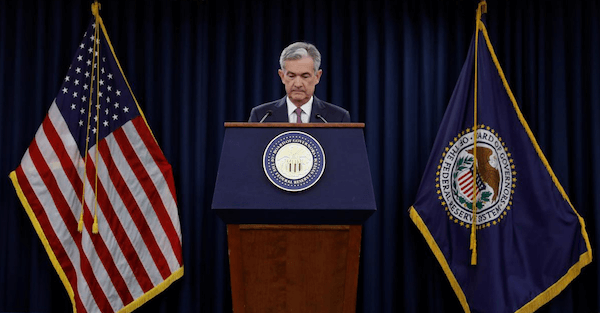 Hallelujah, the US stock market is once again at an all-time high thanks to a little help from our friends at the Federal Reserve.

Every summer, central bank officials from around the world gather in Jackson Hole, Wyoming (which, if you haven’t been, is REALLY spectacular. Jackson Hole, that is, not the Fed conference.)

The event was held last week. And the main event was a speech from the new(ish) Fed Chairman Jerome Powell.

His tone was decidedly ‘dovish’, as the commentators on CNBC will tell you. Dovish is code for “We’re going to keep interest rates low for as long as we can.”

And on that news, the market soared. That’s all anyone needed to know.

Low interest rates mean that we don’t have to be responsible anymore. We can borrow from future prosperity in order to consume today.

Low interest rates help companies continue down the most absurdly destructive paths, like going deeper into debt to finance businesses that burn through billions of dollars each quarter.

Bear in mind that the entire reason the Federal Reserve even exists is to put more money in the pockets of the banks ensure a ‘stable financial system’.

Officially this means making sure that both inflation and unemployment remain relatively low. And they do this by fiddling with interest rates.

If the unemployment rises too high, for example, the Fed waves its magic wand and slashes interest rates.

In theory this would get people to start borrowing (and spending) again, causing an increase in economic activity… and creating more jobs.

On the other hand, if inflation starts getting out of control, the Fed would jack up interest rates and put the brakes on spending and borrowing… giving prices a chance to cool off.

Essentially, by increasing or decreasing interest rates, a tiny, unelected committee of central bankers has the power to radically alter our buying and investment decisions.

Now, one would hope that this tiny, unelected committee would be unparalleled in its genius and ability to foresee the world’s economic future.

But sadly this is not the case.

And if you need proof of this, just consider this collection of quotes from Treasury Secretary Hank Paulson (also ex-CEO of Goldman Sachs) and former Federal Reserve Chairman Ben Bernanke around the time of the Great Financial Crisis ten years ago.

For context, remember that the stock market peaked in October 2007. And the crisis really kicked off on September 15, 2008 when investment bank Lehman Brothers failed.

(The market then tanked, dragging the economy with it, reaching bottom in March 2009.)

In an interview in July 2005, in response to a question about a potential housing bubble and possible recession, Chairman Bernanke responded:

“Well, I guess I don’t buy your premise. It’s a pretty unlikely possibility. We’ve never had a decline in house prices on a nationwide basis.”

And in January 2008, one month after the recession officially started, Bernanke said:

“The Federal Reserve is not currently forecasting a recession.”

Then Paulson in February 2008:

The economy “is fundamentally strong, diverse and resilient. . .”

Treasury Secretary Hank Paulson in May 2008, with about a year of carnage remaining:

“In my judgment, we are closer to the end of the market turmoil than the beginning.”

Bernanke from June 2008, just three months before the big crash:

“The risk that the economy has entered a substantial downturn appears to have diminished over the past month or so.”

And this one from Paulson in July 2008, T-60 days from an epic Wall Street meltdown:

“Our banking system is a safe and a sound one.”

The expectations that a handful of [did I mention they are unelected?] bureaucrats can possibly control all the levers of the largest economy in the world with flawless precision is an insane fantasy.

So now Chairman Powell is telling us that there’s nothing to worry about.

He described his strategy as looking “beyond inflation for signs of excesses” and set policy according to that.

In other words, the Fed is watching out for signs of ‘excess’. But so far they don’t see any.

Uhh… What planet are these people living on?

Let’s look at the obvious:

First off, there’s the nearly $10 TRILLION of bonds that still trade at negative yields. Excessive?

Or the fact that companies like WeWork, Tesla and Netflix are able to raise billions of dollars despite continuously losing money… and their stock prices and valuations SOAR. Excessive?

There’s also a $1 billion plot of residential land for sale in Beverly Hills and a Leonardo Da Vinci painting that recently sold for $450 million. Excessive?

There’s simply too much money in the world today, as a direct result of the Fed keeping interest rates too low for too long and printing trillions of dollars.

Everywhere you look today, financial absurdities are staring right back at you.

But the Fed has turned a blind eye to all of these excesses.

The important thing to remember is that no one can predict the future… including [wait for it–] unelected central bankers who wield totalitarian control over the economy.

They are going to screw up. They have screwed up.

In the past they have completely and totally missed the warning signs of the biggest financial meltdown since the Great Depression.

And it would be utterly foolish to think they’re not going to miss the next one.