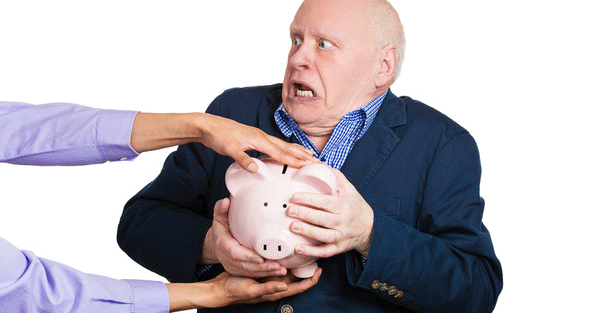 It was only a few weeks ago that I told you about the government’s annual report on Social Security.

It was a veritable death sentence for the program.

Amazing. Even Social Security knows that they’re bankrupt and unable to keep their promises to taxpayers.

This is going to cause an unbelievable crisis in the United States.

Think about it: half of Americans have ZERO retirement savings and will be fully dependent on the Social Security once they retire.

But by the time their retirement comes, the program will have likely already run out of money.

Well, the government has figured out a solution. And it’s genius.

Two weeks ago a new bill was introduced on the floor of Congress that, just like all the other really dangerous legislation, i.e. USA PATRIOT Act, this bill has a catchy acronym.

It’s called the SAVE UP Accounts Act, which stands for. . .

I just tasted vomit in my mouth.

In short, SAVE UP mandates certain employers and businesses in the United States, including many small businesses, to start contributing a fixed amount of money per employee into a brand new national retirement fund.

Based on the contribution requirements and the average wage in the United States (about $50,000 annually), the bill is slapping a 2% wage tax on employers.

So an additional 2% tax effectively constitutes a 32% proportional increase.

This idea is such a classic example of government thinking.

Social Security is failing and will be unable to keep its promises to taxpayers in the next decade.

And yet the best solution these people can come up with is to raise your taxes, steal more money, and establish a brand new government-run retirement fund.

Their logic is unbelievable: “If at first you don’t succeed, keep trying the same loser tactics.”

Sadly, SAVE UP is not isolated.

A similar bill was introduced in the US Senate a few months ago.

The Senate version aims to create an “American Savings Account”, i.e. another national retirement fund to be managed by the government.

Then, of course, there’s President Obama’s “MyRA” program, where workers contribute a portion of their paychecks to a retirement account managed by the federal government.

And MyRA has already been launched.

(The SAVE UP bill, by the way, could also make it mandatory for a business to sign up all of its employees for a government MyRA account.)

The trend here is pretty clear.

Social Security is rapidly running out of cash, and they’re solving the problem by having American citizens and businesses essentially “bail in” the program with higher taxes and more contributions to government retirement funds.

And this is just what’s happening right now, at a time when very few people are paying attention to the problem.

Just imagine how much more they’re going to steal once the looming Social Security bankruptcy becomes front-page news in a few years.

Right now time is on your side. They’re not going to unveil any hideous new program tomorrow morning.

But there are two key lessons to take away here:

1) It’s imperative to consider these long-term “bail-in” implications and structure yourself accordingly.

The more assets you keep within a bankrupt government’s jurisdiction, the more likely you are to become a victim of future taxation and confiscation.

2) You absolutely cannot depend on the government for your retirement.

These programs are going broke. That is not a sensational statement. It is a direct representation of the facts as they have been laid out by the Treasury Secretary of the United States.

Again, time is on your side.

If you invest it wisely, you can develop the skills to supplement your income in retirement (for example, how to generate extra income online), and how to manage your finances to generate higher returns while taking less risk.

Education is the greatest tool we have to solve this retirement problem… as long as you start early.